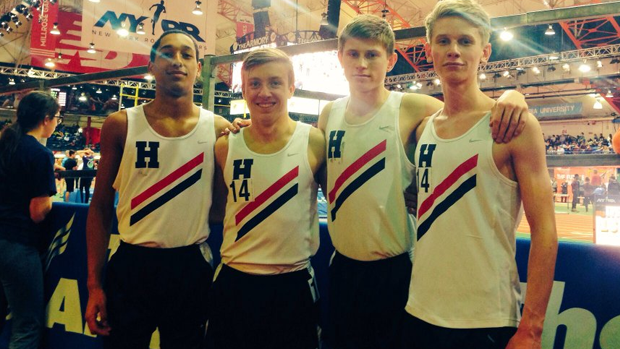 Photo of Haddonfield's NJ#1 US#2 DMR team thanks to Coach Prusso via twitter.

New Jersey went to Eastern States and came away with seven gold medals on both the girls and boys side, 14 total. All of the New Jersey leading performances can be found below in the table, each event links to NJ only lists from the meet. We'll also quickly highlight some of the best performances out there on Tuesday.

We start with Alyssa Wilson of Donovan Catholic who destroyed her own state record in the shot put with a new US#1 throw of 54-11!! That improves upon her previous record of 54-05 which she set way back on December 19th. This was a great way to come back off her first loss of the season at the NJ Meet of Champions to Nickolette Dunbar who finished second at this meet with 51-08. New Jersey took the top five in this event. Watch her winning throw below submitted by her father Jamie Wilson.

Another New Jersey great Sydney McLaughlin kept her season rolling with a NJ#1 US#9 time in the 200 meter preliminaries running 24.00. Despite not participating in the finals she led the meet with that time by .60. She would return to run the 4x200 meter with a second place NJ#1 US#4 Union Catholic squad who posted a time of 1:39.29. This was after battling with Paul Robeson of NY who won with a time of 1:38.40.

Those are just a handful of the great performances that took over state leads, take a look at the full list of NJ leading performances at Easterns below.

And Justes Nance of Blair Academy jumped to 24-0.25 in the long jump ranking him NJ#1 and US#8 this season.

Again that is just a highlight of NJ#1 performances, take a look at the rest of the winners and New Jersey leading performances below. The state did some great work!