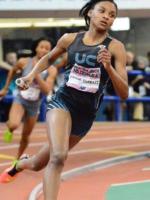 Union Catholic Girls First American Team in COA 4x4 at ...
The Union Catholic girls took to the track ready to go head to head with top Jamaican and American teams in the Championship of America 4x400 meter on Friday at Penn Relays. ...

Sydney McLaughlin, Union Catholic Use Nerves For Fuel A...
The Vikings look to be the first Americans to win the Championship of America 4x400m since 2008...

Union Catholic Senior Amari Onque-Shabazz Commits! See ...
Check out where she has chosen to continue school and her athletic career....