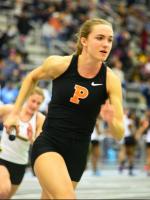 Another tidal wave of records...
The lengthy list of state meet records from 2014 includes a 53.44 400 from Nicole Montgomery. Photo by Alan Versaw....

Magic under the lights...
When Bailey Roth dropped Ben Butler on lap four, it became a solely a contest of Roth vs. the clock. Photo by Alan Versaw....

Madelyn Baron: Princeton plucks one from the Eagles' ne...
Madelyn Baron is making a huge impact for Pine Creek this spring and hopes to continue that success at Princeton next year. Contributed photo....

Garry Berry opens 2014 in style...
With five meters to go in the 800 meters, Fountain-Fort Carson&#39;s Philip Benjamin Thomas was in full stumble mode, but he managed to keep his feet for another five meters and the win over Bailey Ro...

Out like a lambkin...
Freshman Audra Koopman scored the biggest day at the Altitude Running Invitational, including winning the long jump at 17-9. Photo by Alan Versaw....