A Story of Respect 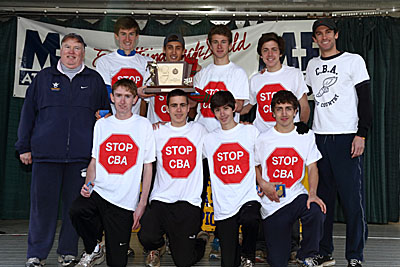 As I was walking around Holmdel Park this past Saturday morning, I noticed a group of runners wearing Tee Shirts that bore the slogan "Stop CBA" in the same style of a tee shirt that first made it's appearance in 1972 as a tounge in cheek jab at the American distance running legend Steve Prefontaine. Ater the wave of nostalgia passed, leaving me with a smile on my face, I thought to my self " Wait until the CBA faithful get a look at that".  I busied myself with covering the always exciting Meet of Champions and did not see the shirts again until I made my way to the awards ceremony.

As I came around the corner of the shelter building, I saw the "Stop CBA" shirts again, only this time on the backs of the Boys Champion team Christian Brothers Academy (CBA). My initial reaction to this sight was "What the heck". I wandered over to Colt assistant coach Chris Bennett who after accepting my congratulations on the win said "Aren't those shirts great"! He went on to tell me that a group of runners from, he thought Delaware Valley HS, had been wearing the shirts around the course and that when everyone was gathering at the awards site these kids gave the CBA runners literally the shirts of their backs. His reaction... "Isn't that great, what a great, creative thing to do!"

This afternoon, Delaware Valley coach, Dave Giantisco emailed me with the story which is reprinted with minimal editing below.

On Saturday, two of my runners and I wore “Stop CBA” shirts at the Meet of Champions as a gag to show our appreciation for NJ running.  It was never meant to be taken literally, and most people understood that.  We’re big fans of CBA, and we thought it would be a clever spin-off of the Steve Prefontaine movie. Back in August, I asked a local screen-printer to make ten t-shirts with the “Stop CBA” logo on the front. Initially,I wanted to use the shirts for our pre-season team photo for the local newspaper, but that never worked out. To my disappointment, these shirts just sat in a box for ten weeks.


However, last week, Korey McNally (a senior on the Del Val XC team), suggested that we wear the t-shirts at MOCs.  Del Val didn’t qualify for MOCs this year, so Korey, Anthony Capone (a soph on the DV team), and I drove to the meet as spectators.  As soon as we arrived, we put on the shirts. Almost immediately, we received lots of positive feedback fromother spectators and runners.  Mostpeople expressed their appreciation.  Wenever encountered any hostile fans, which was a relief.
A  lot of people thought we were from Don Bosco Prep, and we continually had to explain that we were just three fans from a small school in Hunterdon County.  At one point we accidentally walked behind the CBA guys about ten minutes before their race.  I remember George Kelly turning around and asking us (with a laugh) “What school are you guys from?”  I felt a little embarrassed because I never intended to expose these shirts to the actual CBA runners.  I didn’t want to offend them or psyche them out before their race.  So we mumbled a quick response and dashed off.  I yelled to Korey, “Do you know who that was?  That was CBA! They must think we’re complete jerks!” Korey replied, “No this is great! It’s just like when Gerry Lindgren wore his “Stop Pre” shirt on the starting line in the Prefontaine movie.”

As most spectators do, we ran to different spots of the course and eventually saw CBA’s assistant coach, Chris Bennett, at the bottom of the bowl.  He read our shirts with a laugh and I assured him that we weren’t anti-CBA fans oranything like that.  It was just afriendly joke.
The race was awesome.  CBA placed four runners in the top 20 and set a new course record for fastest team averagetime.  We cheered for our local Hunterdon County runners, then sprinted down to the finish line.  At one point, we were running next to Ed Cheserek (who was running in jeans).

When the race was over, we removed the t-shirts and waited near the stage for the award ceremony to begin.  After the girls ceremony ended, we walked over to the crowd of CBA runners and gave them our shirts.  I briefly described the story behind the shirts and how we wore them in the spirit of Prefontaine.  The CBA runners were delighted and thanked us.  I didn’t realize they would be so receptive of the idea, and so we told them that we’d be back with the other shirts.  I had left the others in my car, so we ran back to retrieve them.  We kept two shirts for ourselves, and gave the remaining ones to CBA.  Seeing them walk up the stage wearing the “Stop CBA” shirts was the coolest thing in the world. It was like Prefontaine putting on the “Stop Pre” shirt after winning the Olympic Trials.  We cheered loudly forthem when they accepted their trophy, and then walked back to the car feeling pumped up and energized.


Cross Country is such a greatsport.  We’re all runners and fans at heart.  We can all relate with one another.  I had forgotten how much fun it is to watch the MOC as a regular spectator and not someone who’s directly associated with a participating runner or team.