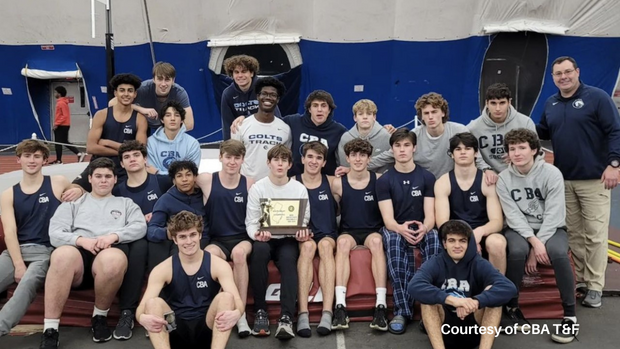 The Union Catholic girls and Christian Brothers Academy boys, two of the most storied programs in state history, added to their remarkable tradition of dominance when the two powerhouses each captured an eighth straight championship at Friday's NJSIAA Non-Public A Relays Championships at the Bennett Center in Toms River.

CBA's victory extended its state record to a remarkable 31 state relay titles overall. That's 12 more than any other team in state history. Willingboro is No. 2 all-time with 19. And the eight titles in a row ties CBA for the most consecutive championships ever won for a boys program with Asbury Park (1988-95) and CBA (1981-1988).

CB kept its streak alive by winning five events and scoring in all nine events on the way to a hard-fought 72-60 victory over a very strong Seton Hall Prep squad,

The victories for CBA came in the distance medley relay, the 4x800, the 4x400, the high jump, and the shot put.

Seton Hall Prep received several strong performances, including splits of 49.5 in the SMR and 21.9 in the 4x200 from Princeton University-bound Xavier Donaldson. The Union Catholic girls once again showed that they are the No. 1 team in the state with the greatest performance in meet history as the Vikings racked up a meet record 80 points out of a possible 90, and shattered two meets records and one facility record.

UC's eight straight titles is the second most for a girls program in meet history behind the nine in a row that Hopewell Valley captured from 2002-10.
The biggest highlights of the meet came in the shuttle hurdles and the 4x200 relay as the Vikings absolutely blew up the track in those two races!
Union Catholic torched the track to win the shuttle hurdles as Taylor Cox, Ajanae Thompson , Leah Gould, and Alexandra Bonn combined to run 30.81, and Thompson, Cox, and Gould teamed up with Taylor Aska to burn a 1:42.94 to finish first in the 4x200!!!
Just how fast are those times?
The 30.81 is the second fastest time in state history,  smashed the Non-Public A meet record of 30.98 set by UC in 2015, and broke the Union County record of 30.87 that the Vikings set earlier this month at the Union County Relays. The only team to run faster in state history is Winslow, which dropped a 30.74 at the 2014 State Group 3 Relays.
As for UC's 1:42.94 in the 4x200, that's the fastest time in meet history for all the groups combined, and is the fastest time ever run at the Bennett Center, and !!! The previous all groups and facility record was 1:43.52, which was set in 2015 by Union Catholic.