No one gave them much of a chance.

There just didn't seem like there was any way that the Union Catholic girls could still win the Meet of Champions title after its No. 1 runner was knocked out of the lineup with an injury. That's just too much to overcome against the best teams in the state.

But that's not the way No. 2 ranked Union Catholic was thinking.

Instead, UC was fueled by its sudden underdog role and was determined to prove everyone wrong.

And that's exactly what happened as the Vikings scored one of the more improbable victories in the 50-year history of the NJSIAA Meet of Champions at Holmdel Park on Saturday when the Vikings pulled out a thrilling 79-88 upset victory over heavily favored and No. 1 ranked Haddonfield. This is the first M of C girls title for Union Catholic, and the first girls championship ever for a team from Union County.

Zawatski, 12th last year, used a hard charge on the way into the bowl to break away from the field and she ran unchallenged the rest of the way en route to victory in 18:38. She's the first runner from Freehold Township (boys or girls) to win an XC M of C title. (See down below for more on Zawatski's victory). When Union Catholic star junior Peyton Hollis had to drop out of the Non-Public A race last week with a season-ending leg injury, the odds were stacked against UC and the scales were tipped in Haddonfield's favor heading into this highly anticipated showdown.

But one thing that can't be measured or calculated is resiliency, intestinal fortitude, heart, grit, and motivation. All of those things mixed together ignited Union Catholic to its heart-pounding nine-point victory.

So how exactly did it all come together for UC?

With its victory coupled with the Union Catholic boys winning its first M of C title last year, UC became just the third school to ever win both a boys and girls M of C title. Bernards and North Hunterdon are the other two. Bernards swept the boys and girls titles in 1982, and the boys also won in 1981 and 1985. North Hunterdon swept the titles in 1983, and has captured a state-record tying nine girls titles.

UC Coach Mike McCabe knew winning without Hollis was a long shot, but he never felt they had no shot.

"I told the team that we're the underdog, and it will be tough to win,'' said McCabe. "And if we run our best, we will be proud regardless of the outcome. But we had a plan, and I thought if we could execute it, we had a shot to win. It was a tough loss (losing Hollis), but we told our girls we had two girls we could put in front of their one and we thought if we could mix it up with their five, we might have a chance and our three and four beat theirs and our five just lost to their. I'm just so proud of them.''

McCabe praised how his team rose to the challenge in the face of adversity.

"Last week was a tough week of racing for our girls,'' said McCabe. "I am extremely proud of how they bounced back. Their response to last week and resiliency as a team is what stands out the most.''

Gunsiorowski said that being the underdog took a lot of pressure off the team.

"We knew that since we were now the underdogs we could go out and have fun, and run without any pressure '' said Gunsiorowski. "We all ran our hardest and believed in each other.''

Hollis, who was undefeated in her first season of XC before the injury, wasn't surprised that her teammates proved everyone wrong.

"I knew they could still do it, and I couldn't be happier,'' said Hollis, who is the ultimate team first athlete. "It's bittersweet because I obviously wish I could have been out there running with my team, but I knew if they ran with their hearts they could win. All the girls on the team have worked so hard for this for so long, and I'm so proud of them for the way they all ran for each other to win this.'' 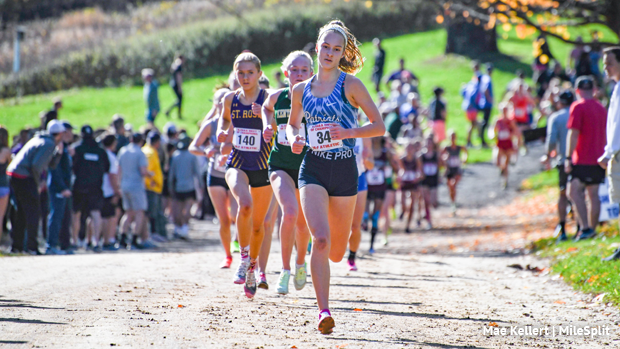 CATCH ME IF YOU CAN

Emma Zawatski is no different than most distance runners. When you find a race plan/strategy that works best for you, you stick with it.

For Zawatski, she likes to charge out to the lead and take the race by the throat and dare the rest of the field to try to catch her.

That formula worked for her last week when she won the State Group 4 title, so she followed that blueprint to perfection again on Saturday, and it paid off with the second M of C title of her career.

After a 6:15 first mile, Zawatski, who was leading by a few yards, broke away from the field as she charged down the path that leads to the bowl.

Zawatski, who put the race away by hammering through the bowl on her way to a race-changing 5:58 second mile, took a quick look back as she climbed out of the bowl and didn't see anyone as her lead had increased to 17 seconds over Hausman and Olivia Murray NJ of Pingry.

Zawatski maintained that lead all the way to the woods on her way to victory in 18:38.The Duke-bound Hausman, sixth last year, closed fast to finish second in 18:47. Murray ran a big Holmdel PR of 18:50 to place third, and Gunsiorowski was fourth in 18:57

Zawatski, who won the 1,600 at the M of C last spring, called this the biggest win of her career.

"I won in the 1,600 last spring, but a lot of the best runners were in the 3,200 or the 800,'' said Zawatski, who led Freehold Township to a third-place finish, it's highest ever. "But this race has everyone together and there's just one winner. So this is the hardest of them all to win.''

Zawatski said she felt no reason to change her her catch me if you can strategy.

Zawatski, who was surprised that no one matched her move and went with her, said she was having some flashbacks to the Monmouth County Championships last month at Holmdel when she was caught from behind by Cate DeSousa of RBC. DeSousa was 10th on Saturday.

"It always in the back of your mind that someone will be making a charge and could come up on you at anytime, so it's always a little nerve-wracking. "So I just kept pushing it all the way, and thankfully no one came up on me.'' As Zawatski crossed the line, she threw her arms in the air in jubilation.

"I was just so excited,'' said Zawatski. "I've always dreamed of winning this race, so it was very emotional for me. It's a magical feeling to come over that little hill before the finish in the lead. I'm just so happy right now. To win this race against all the best runners in the state is such an amazing feeling.''

Next up for Zawatski is the Champs (formerly Foot Locker) Northeast Regional at Van Cortlandt Park on No. 26 and the Garmin RunningLane Championships in Alabama on Dec. 3.

"It's always been a dream of mine to make it to the national meet in San Diego, so hopefully I can make that happen as well.''

Zawatski has become very good at making her running dreams come true, so I wouldn't bet against her.