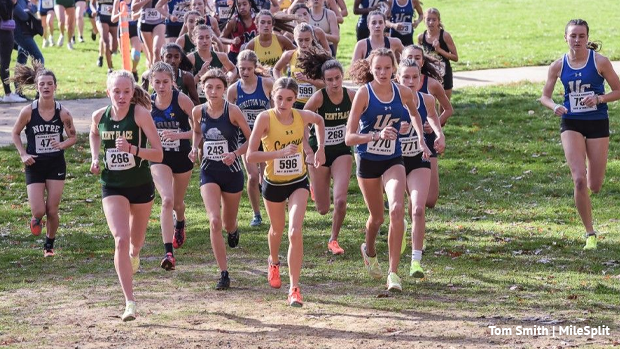 We make our attempt at predicting the top ten individual finishers and the top six scoring teams ahead of the NJSIAA Meet of Champions.

Considering how wild the Group Championships went last weekend the New Jersey cross country season has once again proven it is truly an 'any given Saturday' sport. No matter what the previous results, previews, stats, and so on say if you have the training, heart, and team behind you then it is your race to win.

There are over 100 athletes out there in each race, that's over 100 different storylines and possibilities waiting to happen multiple strides over. If you perform and stay in it, who knows what can happen.

We at NJ MileSplit wish everyone the best of luck as they head out to take on the best of the best this Saturday. Predictions in this article are by Robert Kellert, Jim Lambert, and Pat Montferrat.

The season rankings at the Park show Collin Boler third overall with his 15:28 from Shore Coaches, only behind the injured Jimmy Wischusen and his twin brother Brian Boler both of whom will unfortunately not be competing on Saturday. If Collin can recover from his second place run to Joe Barrett in Non-Public A last weekend he's the only one to have run under 15:30 competing in this race.

George Andrus had a convincing win in the Group 2 ranked second overall with his 15:41, he'll have the team scoring on his motivational list as well and is certainly capable of competing for this win.

Joe Barrett of CBA has continued to shine late in this season having won Shore Conference Championships and the Non-Public A state title through hard fought final stretches, he had the third fastest time of Groups at 15:43.

And then there's the Elizabeth star senior Lucas Reguinho, the fastest time at Groups winning the Group 4 with his 15:39 in a hot sun drenched race. I was personally switching between Reguinho and Boler as the winner here and we all three of us should not be surprised if proven wrong on our predictions if he wins.

There were plenty of variables to keep in mind, some races had it a bit worse than others with the heat and sun versus cloud coverage, injuries, sickness leading up the meet, and so on. It will be very interesting to see who can continue their momentum or recover from a tough race last week.

As you can see by the three selections for who will win this race it is anyone's guess and the top ten is a battle ground that may include surprise finishers come meet's end.

Quick Notes: While it seems all three of us agree on the winner prediction with Cate DeSousa of Red Bank Catholic this race is not lock. DeSousa and Freehold Township's Emma Zawatski have put together a great season and have already raced head to head and at the same meet in different races multiple times.

DeSousa picked up the victory at Monmouth County, here at Holmdel Park, over Zawatski at Monmouth County to be answered back at Shore Conference Champs, at Ocean County Park, with a Zawatski win. DeSousa led all Group Championship performances with her 18:42 in the Non-Public A, Zawatski second overall in the merge at 18:44 off her Group 4 state title.

Either of these stars could leave Saturday with the win but with a head to head and merge lead both at Holmdel we're going to predict DeSousa for the sake of this article.

And that's without mentioning some other strong contenders. Lindsay Hausman of Kent Place School, second in Non-Public A at Groups, has been so good for so long and has plenty of experience in high intensity racing situations, she ran to sixth last year as a junior in this race and could very well put together a winning race on Saturday.

Tilly O'Connor posted the fifth fastest time of Groups leading the Non-Public B at 19:01 and was fourth at MOCs last fall, the top returner from that race in fact. Morgan Uhlhorn of Lakeland earned the upset win in Group 2 last weekend tied for fifth in the merge with O'Connor at 19:01, and we may not have seen all this senior has left in the tank just yet.

Liliah Gordon was eighth as a freshmen at MOCs last fall and posted the fourth fastest time of Groups with her Group 3 state championship run of 18:57. The list goes on for potential contenders.

And just like the boys race the top ten finishers conversation is even more complicated with how many variables we saw at Group Championships last weekend. This is going to be a very exciting race, whether it's a foot race to the line between two well known stars or possibly a new face up front ready to prove everyone wrong.

Quick Notes: CBA has done more than enough to have a unanimous vote for the top spot on our predictions. Union Catholic has displayed enough depth to run second in the state but they'll have a massive battle of a rematch pushing pace between Cherokee and Westfield.

Cherokee and Westfield of course coming off a toasty Group 4 race that played a detrimental role in many athletes' performances. The running order could very well look totally different one week removed, though it is looking to be a similar warm and sunny come race time at MOCs.

St. Peter's Prep had a solid run early in the day at Groups for third in the Non-Public A, we'll see what they have for Haddonfield coming out of the Group 2 race which took off only 30 minutes later, with temperature in mind.

With all that said there are teams outside of the ranked top six who could break into the top six team scoring including Southern Regional and Ridge who definitely battled some heat last week and could be lookin to rip some hot times this go around.

Quick Notes: All three of us are pretty certain these are the six podium teams and Haddonfield Memorial looks favored to win coming out of Group Championships as the new No. 1 ranked squad in New Jersey.

Despite the injury to their No. 1 runner during Non-Public A Championships last weekend Union Catholic has the depth to secure second but it won't be easy if Clearview comes ready to rock at the line. The order behind them however is certainly less certain, as if any of this really can be.

Freehold Township's Group Championship was one of the unlucky races without cloud coverage on the overly warm November day. We may not have seen all we can out of them just yet. Could they break into the top three?

Look for an exciting rematch between North Hunterdon and Northern Highlands who had a close finish of 82 to 85 to finish second and third respectively in the Group 3 last weekend.

North Hunterdon has really started to hit stride at the right time with the return of their No. 1 Cassidy Roop who will be competing for a top ten finish herself individually as well. Northern Highlands may have lost by three at Groups but will the size and pace of the race play into their hands on Saturday? It may go down to extra runners tiebreak.