Elijah Whitaker and Aiden Williams battle around the final bend of South Group 1.

The South Sectional Championships brought plenty of exciting to DREAM Park on Saturday. Below we recap some of the action from each Section, so many great stories between first time winners, record streaks, and hard earned title defenses.

A First Win To Remember For Whitaker

Elijah Whitaker's first win was definitely one to remember! The Glassboro junior picked up his first gold medal and a South Group 1 Sectional title crossing the line at 16:10.

It didn't come easy through as Audubon junior Aiden Williams made a surge the final 800m, while a step behind rounding the final bend to the finish Williams took a spill and hit the ground but managed to hold his spot for second at 16:14.

Whitaker is the first SJG1 winner from Glassboro since Pat Ryan in 1995, Tom Horne also won for Glassboro in 1993 and 1994. Whitaker will return in 2023 as a senior to take a shot at defending his title. Haddon Township Back On Top

After two years in the hands of Audubon the Haddon Township boys once again bring the South Group 1 Sectional Championship home. This is their Section leading 13th overall and first since 2019.

Haddon Township scored ahead of Audubon with 40 points to 88 and averaged 17:12.

The winning effort was led by senior Rylan Martinelli in third at 16:43. He was joined by Owen Dybus in fifth, Jackson Sennhenn eighth, Eric Aylmer 10th, and Manolo Foote in 14th to close out their scoring five. James Clauson and Ryan Erhart finished 18th and 21st as displacers. First Year of XC? No Problem For Maple Shade Champs

During our interview with the freshly crowned South Group 1 Champs of Maple Shade we learned this is the first cross country season for the every member who toed the line on Saturday.

Haddon Township opened up scoring with a first and third place finish to take an early lead but Maple Shade packed up and tightened their top five split to 1:38 to make up the deficit and seal the win. They unseated defending champs Haddon Township by 20 points 55 to 75.

This is Maple Shade's third girls title in school history and first in over 25 years! Their previous two came back to back in 1994 and 1995.

Along with Maple Shade and Haddon Township, A P Schalick, Audubon, and Wildwood all advance as top five teams.

The excitement for the rematch between defending champion Meghan Lex of Haddon Township and Macie McCracken of Wildwood was not met with disappointment.

After a great battle the senior Meghan Lex ran tall through the pressure and won her second straight South Group 1 title with a time of 19:11.

Sophomore Macie McCracken was again a strong second at 19:13 and will have another chance to run for the title next year.

Genevieve Gentlesk was third for Haddon Township at 20:25, Taylor Behrens of A P Schalick fourth 20:27, and the top five individuals closed out by Cassidy Burr of New Egypt 21:03.

George Andrus of Haddonfield shattered the DREAM Park course record with a 14:59, Dennis Fortuna had the previous standard of 15:10 since last year's Sectionals.

The Dawgs had their scoring five across the line by 10th position for an impressive 32 points to Cinnaminson's 59.

Also advancing with Haddonfield and Cinnaminson to Group 2 Championships next Saturday is Haddon Heights, Manchester Township, and Collingswood. 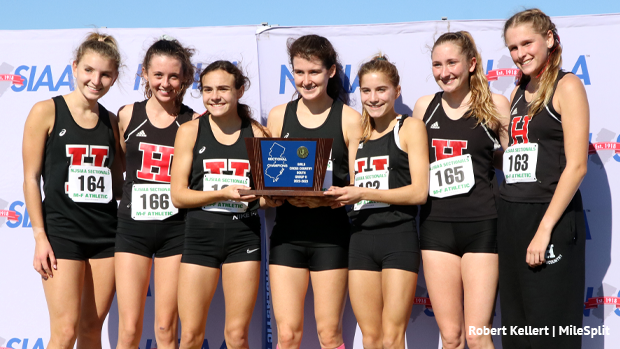 Back to Back Perfect Scores For Haddonfield At Sectionals

For the second straight year Haddonfield runs a dominating score of 15 points while finishing first through fifth!

Paired with a ridiculous 18:19 average and 21 second split this program is running strong heading to Holmdel Park for States.

Ava Thomas won the individual title at 18:07 to make it four straight years with a Haddonfield runner at the front of South Group 2. They've had individual winners here for 21 of the past 24 years Advancing along with Clearview and Ocean City are Mainland Regional, Moorestown, and Toms River South.

Sophomore Sofia Day of Mainland Regional is the top returner heading into the 2023 cross country season running second at 18:12, her teammate Gillian Lovett who also returns next fall as a senior was third at 18:26. Lily Oliver of Toms River South closed out the top five running 18:40. Gateway-Woodbury's star junior Peyton Shute won the South Group 2 last season before being moved up to Group 3 in the NJSIAA Classifications for 2022.

Well, the larger school pool wasn't an issue for Shute on Saturday as he ran 15:17 to earn another Sectional victory and defeated the field by 30 seconds.

After the individual title was decided an intense team battle raged on. Highland Regional struck first with Aziz Muhammad-Kane running second at 15:47.

Ocean City fired back in third and fourth with Nick Scarangelli and Matt Hoffman, but Highland's mid-pack was too strong as Gavin Gallo, Cole Knoedler, and Jake Smith all but sealed the deal with sixth, seventh, and 11th place finishes.

Sophomore Mason Wassell secured the final position needed in 19th for Highland Regional to defeat Ocean City 44 to 58 and return to champion status in South Group 3. Their last title in 2020, this was their fifth title over the past ten seasons.

Also advancing as teams to Group 3 Champs were Shawnee, Delsea Regional, and Moorestown. Cherokee Win Led By 1-2 Fight To Finish By Teammates

Nick Kuenkel and Patrick Ditmars followed a sit and kick strategy to lead the South Group 4 race on Saturday.

The two Cherokee stars were still side by side in a full kick as they rounded the final bend towards the finish, Kuenkel was declared the winner by just .08 of the a second both running a rounded up 15:23.

Their 1-2 finish set Cherokee on the path to defeat a strong effort from Southern Regional 41 points to 62. Cherokee split 1:11 and averaged 15:48.

Colin Hermack of Lenape Regional was third at 15:29. Fabian Ramales and Andrew Bowker of Southern Regional finished fourth and fifth at 15:31 and 15:37.

The Toms River North girls edged out Southern Regional 77 to 83 for the South Group 4 Championship.

The thrilling victory was led by freshmen star Jessica Abbott who clocked an 18:04 finishing a good 11 seconds ahead of the field. Southern answered with Mia Mastrogiovanni in eighth at 19:01 and the two schools traded finishers a few times from there.