On another beautiful day for cross country the top teams and individuals in Bergen County toed the line one last time this season at Darlington Park to crown the Lou Molino Bergen County Meet of Champions winners.

Decambre Victorious After Showdown, Don Bosco Back On Top

Maguire took it out early leading the race through the midway mark but Decambre's last mile was too much to handle as the Bergen County Tech senior clocked a 15:28 to win by ten seconds over the field, the top three put together fast times.

Mihret earned second at 15:38, Maguire third 15:44. Luke Pash of Ridgewood and Bryce Teto of Paramus, both recorded at 16:09, closed out the top five. Just a sophomore Pash is the leading returner heading into 2023. Decambre was runner up at this meet in 2021 and found some great speed on the track last winter and spring running to third at the NJSIAA Outdoor Meet of Champions and earning a PR of 1:55.56 over 800m.

Maguire's third place run led his Don Bosco squad to their first team title since 2015, Bosco had repeat victories the entire decade prior to that. Their 60 to 74 points upset win over No. 13 Ridgewood ended Ridgewood's own streak of four straight.

Leanna Johnston of Immaculate Heart Academy took the lead early and ran away with the BMOCs individual title clocking 18:09, dropping about 50 seconds off her 2021 performance!

The senior star commented that a changed mindset, to take it easy on herself and not add anymore pressure than needed, has been a game changer this fall season.

Johnston is IHA's first individual winner since Erin Thompson and Sarah Pagano each won two straight from 2007 through 2010. She's the fourth athlete in school history to hold the honor and added their sixth overall individual win including Theresa Hearn's victory back in 2002. The title was well earned taking on Outdoor NJSIAA Meet of Champions winner Christina Allen of River Dell who posted a strong run of 18:22 dropping ten seconds off her Bergen Group victory the week before. Allen is the meet's top returner for 2023 when she returns as a senior.

Allison Courtney of Northern Highlands was third at 19:05, Cellina Rabolli of Ridgewood fourth 19:06, and Zoe Merryman of Mahwah fifth at 19:07.

The team race in this one was some can't miss XC! No. 6 Northern Highlands took on No. 5 ranked Ridgewood and No. 8 Ramapo to win a closely contested event with 48 points to Ridgewood's 56 and Ramapo's 72.

Ridgewood split finishers with Northern Highlands throughout the top 20 individuals scoring 3+9+12+14+18 for their 56 point total. 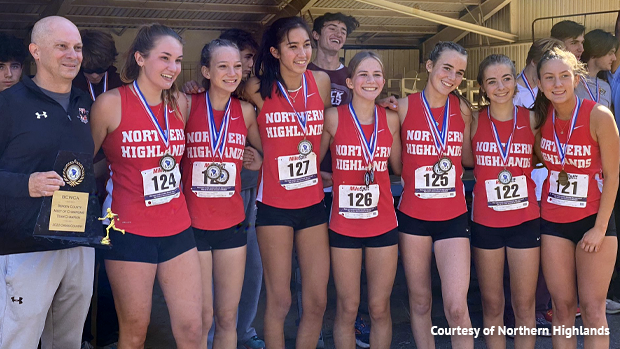 This was Northern Highlands first team win since 2017 and their fourth overall. They return their entire top five scoring set in 2023 which may lead to a continued trend as of late. The previous five schools to win BMOCs all went on winning streaks of various lengths.