Angelina Perez NJ of Lakeland Regional and the Willingboro boys made state history, Shamali Whittle sizzled in the sprints, and the Rumson-Fair Haven rocked the girls team competition at the State Group 2 Championships at Franklin High School in Somerset.

Here are the highlights from an amazing two days of running, jumping, and throwing.

Perez strengthened her case to be regarded as the greatest female distance runner in NJ history, and the Rumson girls got off to a fast start and kept the pedal to the metal all the way to the finish line as the Bulldogs defeated runner-up Demarest, 64-51, to captured their third state title in school history. Rumson also won the girls Group 2 Championship in 2019, and shared the Group 2 crown with Ewing in 2008.

Perez, headed to the University of Florida, which captured the NCAA Division 1 title this weekend, produced a performance for the ages on Friday when she stopped the clock at 9:53.29 to shatter the State and All Groups meet record in the 3,200. Perez came back Saturday to win the 1,600 in dramatic fashion when she edged Molly Malague of Metuchen to win the 1,600 in 4:48.65. In the team competition, Clemmie Lilley and Chloee Dotts were the catalysts for Rumson's remarkable run to the title.

Lilley, a freshman, was simply spectacular! 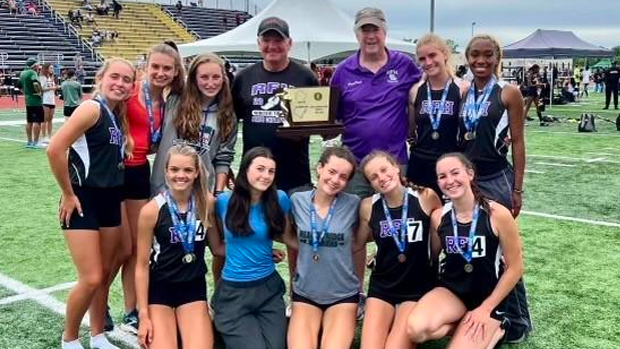 Molly Malague of Metuchen, who is headed to Harvard, ran two of the fastest times in meet history in the 3,200 and 1,600 as she finished as the runner-up in both races to Perez. In the 3,200, Malague ran 10:16, which is No. 9 in state history and smashed her own Middlesex County record. Malague's second-place finish in the 1,600 in 4:48.71 also broke her own Middlesex County record.

Demarest swept the throws for the second straight year!!!!

Junior Shea Burke of Point Pleasant Boro made it two straight titles in the 100 hurdles with a time of 14.83. Burke ran 14.71 in the trials.

High Point picked up a pair of wins in the field from seniors Rachel Mason in the pole vault (12-0) and Leia Ruvo in the long jump (17-6). 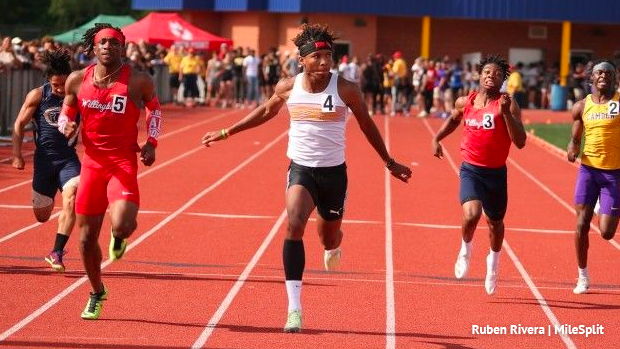 Shamali Whittle of Nottingham, one of the greatest sprinters in state history, smashed two meet record and in his final high school meet in N.J., and Willingboro set one of the most unique records in meet history when the Chimeras rolled to an 86.50-4 victory over runner-up Haddonfield.

The University of Georgia-bound Whittle won his final two state titles on the same track where he won the first state title of his life.

Whittle, who ran a 20.55 (No. 2 in state history for all conditions) earlier this season, won the 200 at the New Balance Indoor Nationals in March, will run at the New Balance Nationals next week rather than defend his 100 and 200 titles at the Meet of Champions. Whittle wants to add an outdoor national title to his remarkable resume. 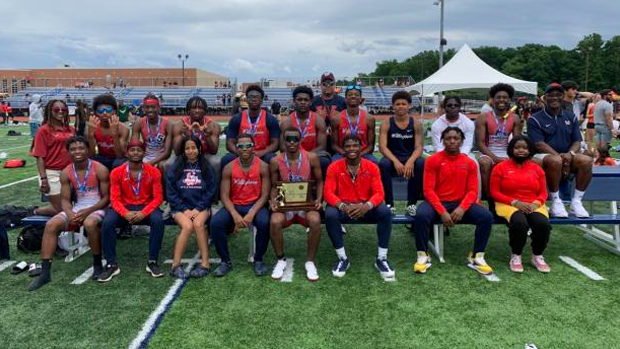 In the team competition, Willingboro became the first program to ever capture State Championships in all four public school Groups as the Chimeras raised their total to 14 state titles, the 14th most in state history. Only Christian Brothers Academy (24), Montclair (21), and Glen Ridge (15) have won more.

Several athletes contributed in the dominating victory for Willingboro.

Metuchen's Brandon Sinclair was one of the biggest stars of the weekend.

The first three legs for Metuchen's all-underclassmen 4x800 consisted of sophomore Juan Nicholas Hidalgo (2:03.26),sophomore Alex Patelski (2:01.72), and freshman Eric Schleif (2:04.70), who all PR'd as the Bulldogs sliced nearly 15 seconds off its winning time of 8:15.91 at the Central Jersey meet last week.

Clevenger has now captured state titles in all three seasons this school year. He won the Group 2 title in cross-country, the Group 2 1,600 indoors, and now has two outdoor titles. What an amazing career!!!!

Max Zuckerman of Pascack Hills won his second straight pole vault title in dramatic fashion when he made 15-6 to win a jump-off vs. Cnnor Munson of Westwood. After both vaulters missed their third attempts at 15-6, the bar stayed at that height for the jump-off, and Zuckerman, who used a new and bigger pole when he got to 15-6, made it and Munson missed.

Alexander Sadikov of Ocean Township, who got DQ'd for pushing over a hurdle when his steps where off in the 400 hurdles on Friday, got the redemption he was seeking on Saturday when he won two gold medals.

Manchester Township swept the horizontal jumps as senior D'Maari Brown shattered the school record when he won the triple jump with a 47-0.50, and junior Al-Mubaraq-Aderogba soared 22-0.50 to win the long jump.

Senior Daniel Jakubowski-Lewis of Roselle dropped a big PR when he won the 400 hurdles in 54.42. Jakubowski recently had a bout with bronchitis that slowed him up, but he got healthy in time to score the biggest win of his career.