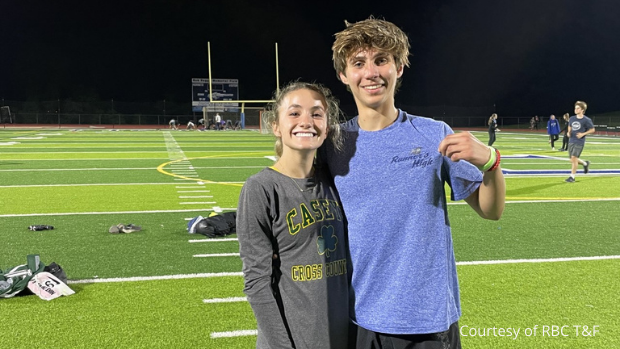 Results of Royal Rumble in Holmdel | Results of Haddonfield Invit.

One of the best things that's happened to track and field in New Jersey over recent years has been the addition of several weekday invitationals.

These twilight races, which attract talented runners from all over the state, have been set up to give runners the best chance possible to run fast, and we saw that come to fruition once again on Thursday night when Marco Langon of Bridgewater-Raritan and Cate DeSousa of Red Bank Catholic took over the state lead in the 1,600m at the Royal Rumble in Holmdel, and several runners ran huge personal bests at both the Holmdel meet, and at the Haddonfield Invitational.

When the dust settled on a great night of racing in the Garden State, 13 boys broke 4:20, and five girls dipped under 5:00.

At the Royal Rumble, the Villanova-bound Langon, who won Meet of Champions titles in XC and the 3,200 indoors, finished first in his first 1,600m of the season in 4:07.93, the fastest time in the state this season. Langon, one of nine runners in the race who broke 4:19, was running his first 1600/mile since he ran 4:04.60 to place fourth in the mile at the New Balance Indoor Nationals.

Junior Colin Riley of Dayton finished second to Langon with a NJ No. 5 time and school record 4:13.92, a PR by nearly three seconds.

DeSousa, a junior, ran a personal best and NJ No. 1 time of 4:49.06 (nearly five seconds faster than her previous PR), to finish as the top girl in the mixed race. DeSousa was one of five girls who ran under 5:00 at Holmdel. St. Rose junior Tilly O'Connor was the second girl to cross the line, running a school record and NJ No. 3 time of 4:51.37.

Times were super fast in South Jersey as well as senior Seth Clevenger (on the right in the photo below) ran a NJ # 3 time and meet record of 4:09.34 and junior George Andrus dropped a NJ No. 4 time of 4:10.97 as the Haddonfield teammates led five guys under 4:17!!!! Clevenger's 4:09.34 trails only Langon and Jackson Barna of Ridge (4:08.07) on the state list this season, and just missed breaking the Haddonfield school record of 4:09.30 set by Colin Baker at the 2009 Meet of Champions.