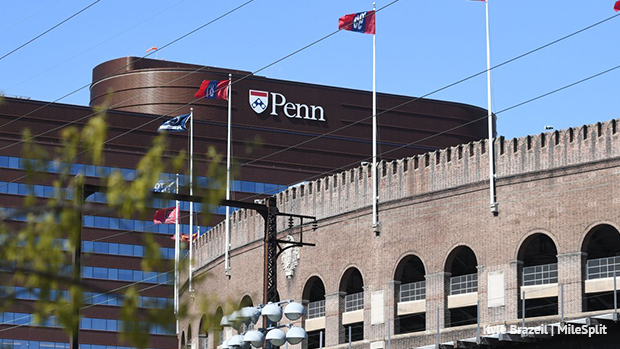 There's a placed called Federal Donuts right by the UPenn campus with the best fried chicken sandwich on the planet. They also have the best donuts on the planet-weird combos like maple and potato chips and chocolate and mango chili and listen, if you're going to buy only two, what kind of a person are you really?

There's also a track, you might have heard of it, called Franklin Field only a stone's throw away from said place. Every year, with few exceptions, it hosts arguably the largest meet on the East Coast: the Penn Relays.

That's right. The Penn Frickin' Relays-the meet where the past and the present, legends of tomorrow and legends of yesterday and legends of today all come together for one glorious weekend in occasionally sunny weather in the city of brotherly love.

And it's just a stupid track meet with a glaring lack of sunscreen and an overabundance of Chickie and Pete's and 1 mile treks you have to saunter through the interior of the stadium just to get to your seats so you watch 10,000 races and run only one.

Not at all actually. If you scroll up you'll notice that Franklin Field "with few exceptions" hosts the Penn Relays every year.

2020 and 2021 would fall under the banner of "few exceptions." And what a heartbreaking, wild, beautiful, terrible, and hopeful few years those have been.

I realized writing this that many of the boys on my team and many of the boys and girls on your teams probably don't even have a concept of Penn, or even a track meet that isn't some local dual meet or championship-that the years prior have stripped away so much including the idea that you can go to a place or a competition or a track meet that makes you believe in things bigger than yourself.

Some of us probably are standing in different jobs.

Some of us are on different teams.

Some of us moved to different places, and some of us said goodbye to family and friends and some of us, right now, are staring at an empty seat at the dinner table or waiting for a text message or a phone call that will never come.

Some of us are eyeing the memories of our reflections in the early portions of 2020 and waiting for that person to stare back at us every morning, even if we know that person is gone forever. Think just about, on some level, how we were all traumatized by the last few years-even the ones who never lost a job or a home or a family member.

Traumatized. A colleague of mine used that word this year to describe the last few years teaching and it was, truthfully, like having somebody pick a 10,000 pound weight off my back because we were finally admitting it, finally giving that trauma the light it had earned.

Didn't I start this article talking about fried chicken and donuts?

You're right I did. Sorry.

So back to that: when you're done with the fried chicken and donut place you have to find your way for a cheesesteak and the best answer is any place that serves cheesesteaks is probably pretty good. Yes-the stand on the corner in your mind, yeah that place probably serves bomb cheesesteak. Traveling 20 minutes out of your way to Geno's? Not all heroes wear capes.

But this isn't an article about cheesesteaks or donuts. This is an article about track-that sport we're all familiar with where most of the arc of your training and discipline is hamstrung by patience and sometimes failure-where we wait for that time trial or that night of miles or that one throw or one jump to prove to ourselves that it's been worth it all along-yeah, yeah, all of that effort paid off, and yeah...that voice inside your head that said you could do it was right, and whatever demon you've lassoed to your heart can permanently, and forever...actually wait I can't type that two-word phrase that ends with "off."

So let's think about all the heartbreak and patience and failures of the last few years, let's actually give it the light it earned-the loss and the pain and the innocence come and gone, the graduation parties dwindled into a single candle on a single cake, the Christmases over Zoom, the track seasons sliced into pieces. The sound of your coaches' voice telling you to be patient and that the sun will rise again someday and that we have to be ready for that day, and how your siblings and parents told you to believe in the light even when everything was spiraling into the dark and the way that the track smelled in the summer of 2020 when you told yourself that there was a reason for this, for all of this, that to paraphrase the late great George Sheehan: that what we're doing isn't important, but it does have meaning.

And so I bring you back to the least important things on Earth: cheesesteaks and donuts and the sights and sounds of Philadelphia that have been so sorely missing in our memories for years now. I bring you to the hotel fire drill at 1 AM and the walk over to the discus circle bleary-eyed already on your third cup of coffee and I bring you to the kid in your class getting five minutes to BS with his coach and teacher and I'll show you the alums who come visit us in the stands and the hugs and the "I've missed you's" and the knowledge that goodbye, however many years ago, was really just see you later. If you stay with me, I'll show you the way that the team behind us in the stands cried when the 4 x 400 didn't go the way it was supposed to and I'll show you the dropped batons and the tape-breaking victories and the near-misses and the love and the heartbreak, yes the heartbreak, eyes on that weeping team after that 4 x 400, and how tremendously life-affirming those moments were: that we are finally back in a place in our life that we're ready to get our hearts broken again, because for awhile there it felt like the heartbreak was too much and you couldn't bear to love anything again because who in their right mind would ever want another ounce of hurt...

I bring you to the team meetings at 9:30 PM ("lights out by 11, boys") and the way the track exploded in sunlight Saturday morning and how it didn't matter what race was being run or why or who was running it but that we were there and we were alive and we'd made it, and that the boys and girls around us, for the first time since 2019, were seeing the things that made this sport full of life and love and suffering and pain and how, all of those moments prior, the times we adults (especially looking at you parents who saved the day every day for about two years straight) practically begged them to hold onto hope, had finally led to something-the way that track smelled and how it mixed with the acrid leftover scent of whatever race had just ended and the terrible, glorious stench of stale French fries and funnel cake and the knowledge that within that tiny stadium, maybe less than a square mile, there was...what are the right words? There was life. Life and love. That's it.

And oh man-if you could've seen it this past weekend: if you'd lost your faith in everything, I promise it would've restored your faith in something, not a result or a time or a distance, but...

"For a split second here in the grand arc of these kids' lives, they believed in something good. Something bigger than themselves."

That's for next year, isn't it? I'll see you there.

I know this really good chicken and donut place. Trust me.