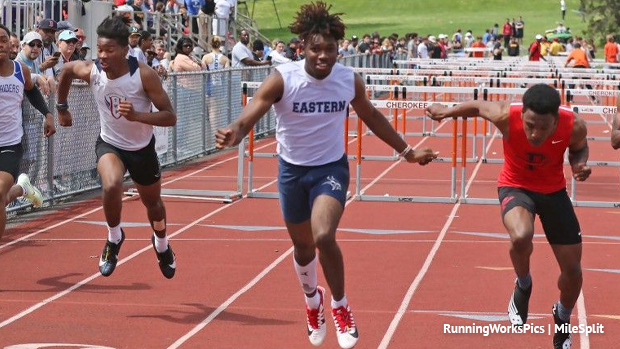 An elite field of South Jersey athletes ventured to Delsea Regional HS Thursday night for the aptly named SJTCA Elite T&F Meet and the results did not disappoint.

Alanna Woolfolk of Clayton and Jenovia Logan of Sterling both cleared 5-06 in the high jump competition and are in a four-way tie for the state lead.

The boys saw a state leader emerge as well as Jaden Johnson of Timber Creek, the defending indoor Meet of Champions triple jump champion, cleared 46-10 in the pit. Moving ahead of Joseph Oduro of South Plainfield who cleared 46-09 at Middlesex County Relays just a day before.

Johnson also won the high jump clearing 6-4. Johnson had the tie break to win over Enrico Barnett of Delsea and Dillon Page of Cherry Hill East who also cleared the 6-4 bar, all now within the top ten this season for New Jersey.

The boys 1600m brought in six of the top 15 times of the season for New Jersey on the combined mile/1600m list.

A deep field led by Haddonfield senior Seth Clevenger crossing the line at 4:12.92 now NJ No. 2 only behind Jackson Barna of Ridge who ran a 4:08.07 back in April.

AJ Brooks almost eclipsed his own state leading time in the 110m hurdles during a final which saw a good portion of the top hurdlers in the state go head to head.

A showdown in the throws took place between Delsea teammates Jason Nwosu and Cade Beradelli. Beradelli getting the best of Nwosu this time round in the discus with a new PR of 174-11 for the win over Nwosu's 171-1.

Nwosu is also ranks NJ No. 3 in the discus thanks to his 177-10 at the Red & Black Invitational in late April.

Austin Hudak led the javelin with a mark of 180-0. The Hammonton HS senior already ranks NJ No. 2 this season off his 193-10 at Woodbury Relays.

The pole vault was won by Noah Kriesman of Cherry Hill East at 14-0. Kriesman already NJ No. 4 at 14-6 this season.

NJ No. 4 ranked Ciara Demarest of Williamstown threw 128-5 to lead the discus and improved her season best in the shot put with a winning 40-0.75 now NJ No. 6.

Millville junior Leah Howard took over NJ No. 4 with her winning javelin mark of 134-10.

Leah Ellis brought home gold in the long jump measured 17-10, just an inch off her NJ No. 4 performance at Woodbury Relays in April.

Jenovia Logan of Sterling is now NJ No. 7 in the triple jump with her winning 37-0 mark.

Junior Reese Gebhard of Delsea Regional and freshmen Hannah Byrd-Leitner of Moorestown vaulted 10-0 to finish first and second on attempts. They are two of just 21 girls to clear that height this season for New Jersey and currently sit tied for NJ No. 16.