Despite the fact that he fouled on his first two attempts in the long jump at the 126th Penn Relays on Friday and was on the verge of failing to advance to the final, the senior at Lawrenceville (NJ) remained calm and composed.

"I really wasn't nervous at all,'' said Foster, who won the long jump and triple jump at the Nike Indoor Nationals last month. "I've been in so many big meets, so I have a lot of experience in these situations. I was confident I would get off a good enough jump to make the final.''

He did exactly by playing it safe when he leaped 22-7.50 at Franklin Field to move into the final round in fourth place.

With new life, Foster started hitting his mark in the finals, and finally got the big jumps he knew he was capable of. After moving into second place with a 23-5.25 on his fourth attempt, he soared a US No. 6 24-11 on his fifth attempt to take the lead for good. Uroy Ryan of Jamaica, who led through the first four jumps, went 24-9 on his last attempt to secure the runner-up finish. 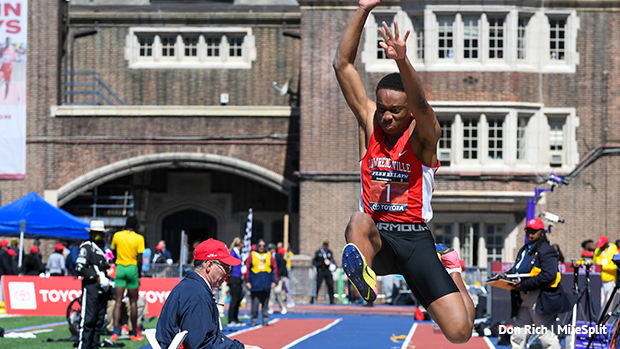 Foster's 24-11, the fifth best all-time performance in Penn Relays history, is the second best among U.S. athletes in meet history, and is No. 8 in NJ history.

Foster, the first NJ winner of the LJ here since Anthony Miles of Winslow in 2003, said he felt it was just a matter of time before he started getting into a groove.

"I was having some trouble finding my mark, but after I got in the finals I made some adjustments and felt i was ready to get off some good jumps,'' said the University of Princeton-bound Foster. "

Foster, who jumped a PR of 25-4.50 when he won the Nike Indoor National title, at Ocean Breeze, said this victory means the most to him.

"Because I've never competed here before, and with the presence of all the great jumpers from Jamaica, I feel this is the biggest championship I've ever won,'' said Foster. "This one really means a lot to me.''

Jamaica Extends Dominance To Throws: While exhibition of Jamaica's scholastic sprint dominance extends decades and is at this point a part of the fabric of the what makes The Penn Relays special, the same cannot be said for the throwing events, where Jamaican athletes did not with their first tiles in the shot put and discus until 2010.

But the days of Jamaican single-threaded bragging rights may be over.

In an incredible display of might, Jamaican squads swept the top two places in both the shot put and discus to no one's surprise.

Young's teammate Trevor Gunzell extended Jamaica's winning streak in the discus to five straight years with a fifth-round throw of 202-8 (61.79m). Racquil Broderick of Jamaica College was a distant second at 194-11 (59.43m). Again, it was a New Jersey scoring the top US finish as freshman Benjamin Shue of Bergen Catholic took third with a final throw of 193-0 (58.82m).

Bahamas Back On Top In Jav: Keyshawn Strachan of St. John's Preparatory put the Bahamas back on the winner's stand in the boys javelin with a second-round mark of 237-9 (72.48m). Strachan joined Denzel Pratt of St. Augustine's College, who won back-to-back titles in 2014 and 2015, as Bahamian javelin title winners. Jose Santana of Eugenio Guerra Cruz of Puerto Rico was the runner-up with a final throw of 197-9 (60.29m). Pennsylvania athletes took the next two places with Drew Mruk of Wyoming Area finishing third overall and top American at 192-3 (58.60m) and Miles Higgins of Ligonier Valley taking fourth at 190-0 (57.91m).

Jamaica Riding High Again: After having its eight-year winning streak snapped in 2019 by the Bahamas, Jamaica is once again champion in the high jump as Dejone Raymond of St. Elizabeth's Tech cleared 6-8.75 (2.05m) on his second attempt at the height. Raymond and Damarion Potts of South Brunswick (NJ) had clean cards through 6-6.25 (1.99m), but Potts missed all three of his attempts at 6-7.5 (2.02m) while Raymond cleared on his third attempt to secure the win. Raymond would eventually raise the bar to 6-10.75 (2.10m) but was unable to clear.

One's Enough For A Triple Title: Jaydon Hibbert of Kingston College (JAM) needed just one jump to secure victory in the boys triple jump, soaring out to 52-3.75 (15.94m) on his opening jump. The mark was wind-aided (+3.8 m/s). Hibbert fouled his second jump, passed in the third round, fouled his fourth jump, did not improve in the fifth round, and fouled his last attempt. Ryan John of Valley Stream North (NY) finished runner-up and as top American with a US No. 1 49-3.5 (15.02m) on his final jump.

Rogers Survives Vault In 'Wind Tunnel': For the second straight day, swirling winds inside Franklin Field made life difficult for the pole vaulters, but Justin Rogers came in well prepared for the conditions. The senior from Hershey powered through, clearing 16-0.75 (4.90m) on his first attempt to secure the victory. Rogers went jump-for-jump with Nicholas Lourenco of Saint Anthony's (NY) after both entered the competition later than the rest of the field. Each cleared 15-9, and then the Virginia-bound Rogers got over the 16-0.75 bar while Lourenco could not. Read more about Rogers' victory here.

--Joe Battaglia and Dan Beck contributed to this report