STATEN ISLAND, NEW YORK -- The track and field action continued during the Nike Indoor Nationals on Saturday at Ocean Breeze.

Veronica Vacca improved her freshmen national record in the pole vault, 13-06.5, the Saratoga girls continued an historic relay weekend, Jordan Anthony moved to No. 3 all-time in the 200m dash and multiple athletes added to their national title count with return performances.

Catch up on the day two action through our event by event winner highlights below.

Girls 60m Hurdles: Akala Garrett of Rams Elite (NC) won the final by .14 ahead of the field! clocking 8.58 and setting a facility record for Ocean Breeze. / Interview

Girls 60m Dash: Autumn Wilson of Leander Spartans (TX) toasted the field clocked at 7.32 to win the final. She entered as the top qualifier from prelims with a 7.38. Wilson doubled back later to finish second in the 200m with a time of 23.53! / Interview

Boys 60m Dash: Jordan Anthony of XCEL Athletics (MS) won his first of two titles at Nike Indoor Nationals when he recorded 6.69 in the 60m dash finals. Anthony came back later in the 200m to run a No. 3 all-time 20.64. / Interview

* Will Sumner after his career best 400m for the NIN title

Boys 400m Dash: Will Sumner of Woodstock (GA) entered nationals weekend ranked US. No 1. After qualifying as the third seed on Friday with a 48.21in prelims Sumner lowered his PR to 46.63 bringing home the national title and destroying the high school facility record at Ocean Breeze as well. / Interview

Boys 4x200m: Hardin Valley (TC) won a five team final with a time of 1:28.76. The squad was made up of Ben Smith, Austin Rome, Aiden Shaw, and Ethan Blaylock. / Interview

Girls Mile Run: Lani Bloom of Ithaca (MI) ran 4:52.47 to win the girls mile. She's no stranger to fast times having won her 2021 outdoor State title with a 4:48.89. This star senior will be heading to Purdue next year. / Interview

Boys Mile Run: Wesley Shipsey of Portland (OR) crossed the finish at 4:11.42 holding off pressure most of the race from second place Rakitis 4:12.79./ Interview

Girls 800m Run: Micah Trusty of Friends Central (PA) took out the race with a 61.88 and never relinquished the lead earning a national title clocked at 2:07.32. / Interview

Boys 800m Run: Nick Plant of Canfield (OH) ran to his 800m title clocking 1:50.70. In his interview he stated this was his first time on a 200m track having most of his indoor experience on the 300m flat track at SPIRE. / Interview 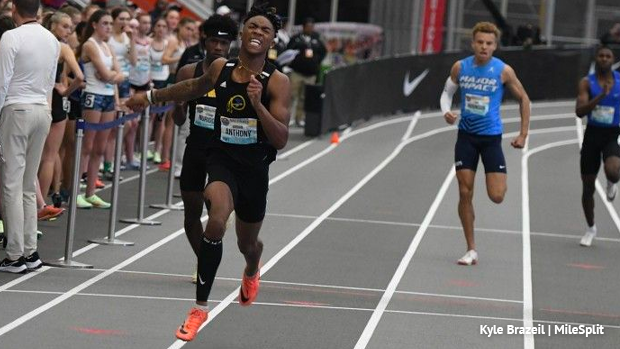 Boys Long Jump: Gregory Foster of The Lawrenceville School (NJ) returned for his second title of the weekend winning the long jump with a 7.73m (25-04.5). The big mark came on his list attempt just like the triple jump championship the day prior. Foster also ran to third, 8.01, for All-American status in the 60m hurdles! / Interview

Girls Shot Put: Mensi Stiff of Lewisburg (TN) improved her US No. standing with a big throw of 16.07m (52-08.75) to win the shot put national title. She led through the entire series of throws with her furthest measurement on the fifth attempt. / Interview

Girls Pole Vault: Veronica Vacca of Plymouth Meeting (PA) improved her own freshman national record in the vault to 4.13m (13-06.5). This also broke the Ocean Breeze venue record for the event. The young star opened with a miss at 3.38m but never looked back from there clearing every height through the winning 4.13m and took three attempts at 4.20m,  / Interview

Girls Long Jump: After finishing eighth in the triple jump the day prior Alyssa Banales of Major Impact (TX) leapt to a 6.04m (19.09.75) to win the girls long jump Championship on Saturday. The mark came on her final jump of the meet improving on a 19-07 earlier in the series. / Interview

Boys Shot Put: Tarik Robinson-O'Hagan of Villa Novans (RI) threw 68-03.25 to win, at that time, his third title of the weekend. Robinson-O'Hagan had won the NIN weight throw the day before with an 85-00.25. He also won the NBN WT title Saturday morning before returning to find this victory in the NIN shot put! / Interview