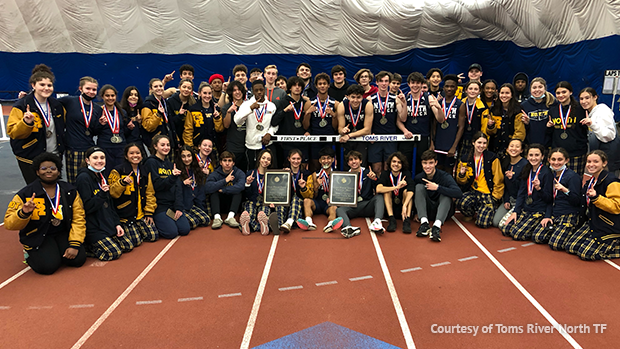 Ocean County Relays had some hard fought battles throughout the meet but Toms River North managed to break through for the team sweep winning both the boys and girls championship titles.

The Toms River North boys brought home four gold medals on the track, winning everything involving the 400m and up to out pace Southern Regional 64 to 60 in the points. This is their first Ocean Relays win since 2017.

The tone was set immediately in the opening 4x800m after an exciting battle with Manchester Township 8.21.67 to 8:22.10. The two fastest flat track times of the season for New Jersey and ranked NJ No. 3 and 4 respectively.

Southern Regional ran to a state leading shuttle hurdles time of 30.76 which despite coming in early January would hold as a full season top five NJ performance over the past four seasons.

We saw two boys clear 6-0 at this meet, only 16 boys have done that so far in 2022 as of this writing. Adam Elkhouly of Jackson Memorial made a major PR of 6-02 to move up to tie NJ No. 6 and Jonathan Orellana of Toms River South made his first 6-0 height now tied at NJ No. 8.

Watch the back and fourth comeback win by Toms River North during the 4x800m.

On the girls side Toms River North showed the same dominance on the track with four gold medals including the shuttle, 4x400m, SMR, and 4x8.

The last team not from Southern Regional to win the girls Ocean County Relays team title? That would be Toms River North back in 2008!

Highlighting North's meet was the state leading shuttle hurdle with a time of 35.00 they lead the entire state by over a half second! Results listing Ava Ellis, Lia Malave, Ayotunde Folawelwo, and Emma Fortuna on the relay.

Toms River East had a good day in the field with individuals finishing among the meet leaders in all three events. Morgan Slomkowski threw 36-03 to move up to NJ No. 9 in the shot put and Nina Casalino and Emerson Dirk were the only 9-0 clearances at the meet.

Dirk was also tied for the meet lead in the high jump at 4-10 with Megan Campanile of Southern Regional.