The Morris County Relays featured some very dramatic team duels that came right down to the final event on Saturday at Drew University in Madison.

The girls competition was so close that it ended with co-champions as Chatham and Roxbury each finished with 60 points to share the championship. It was the first title ever for Chatham, while Roxbury captured its first championship since 2015 and its sixth overall.

Chatham was trailing Roxbury, 54-50, heading into the meet-concluding 4x400, but pulled out the victory while Roxbury finished third to clinch a tie.

Chatham won five of the nine events (shuttles, DMR, 4x200, 4x400, 4x200, and high jump). Triple winner Elsa Spoor cleared 5-4 for the fourth time this season for Chatham, which is tied for the No. 1 jump in the state this winter, and ran on the first-place 4x400, and handled the 400 leg on the victorious DMR.

The Roxbury girls won the shot put and pole vault, and placed in six of the other seven events. Senior Willow Bradley (36-4.75) and junior Danielle Meribe (34-9) teamed up for the victory in the shot, while seniors Alexis Merola (9-6) and Katherine Cammarata (7-0) teamed up for first in the pole vault. 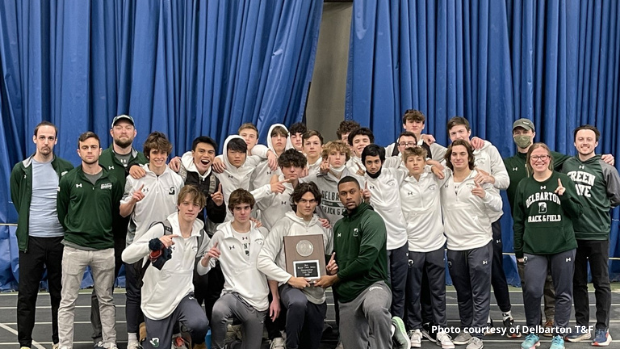 The boys competition was a three-way scramble as Delbarton edged both Chatham and Randolph, 44-42.

Jeff Cianfrocca cleared 6-4 in the HJ for Delbarton, which equals the No. 1 jump in the state this season.