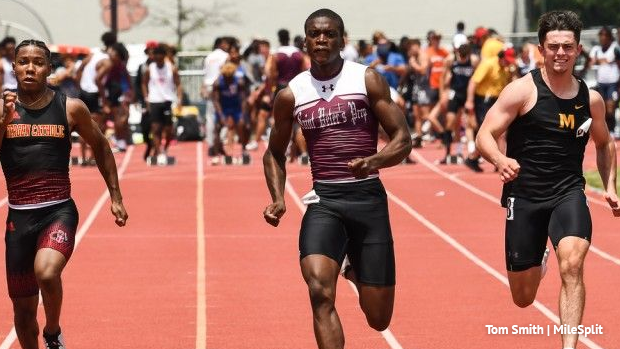 Picture from the 2021 Outdoor NJSIAA Meet of Champions.

Fitzroy Ledgister and Shamali Whittle left lots of smoke on the track with red hot sprint wins, and Peyton Hollis dropped a huge personal best in the mile at Saturday's Energice Coaches Hall of Fame Invitational at the New Balance Track and Field Center in New York.

Ledgister, a senior at St. Peter's Prep, got a rocket start and then powered his way across the line to win the boys 55-meter dash in a sizzling 6.38, which smashed the 37-year-old Hudson County record and is tied for No. 8 in NJ history.

Ledgister, also a football star who hasn't committed to a college yet, also ran 35.41 to place third in the 300, a race won by Nottingham's Whittle. Last spring, Ledgister finished second in the 200m and fourth in the 100m at the Meet of Champions.

The University of Georgia-bound Whittle, who won the 100m and 200m at the NJ Meet of Champions last spring, ran 34.29, No. 2 time in the country so far this season, to win the 300.  It was just the second time Whittle has ever run a 300, and the first time since clocking a 37.62 three years ago. Last summer, Whittle, one of the top sprinters in the nation, ran the fastest wind-legal 200-meter dash in N.J. history when he ran 20.75 in the preliminary round at the Outdoor National Championships.

In the girls competition, Hollis, a sophomore at Columbia, got her season off to a fast start by placing third in the mile in 4:55.26, which is a 13 second PR and the third fastest time in the nation. Hollis is coming off a fantastic freshman year that was highlighted by running 2:11.91 in 800m, and placing third in the 800 at the Meet of Champions.