There have been several epic races and unforgettable performances throughout New Jersey's remarkably rich cross-country history.

What happened at Saturday's 49th Meet of Champions at Holmdel Park is right near the very top of the list of the all-time greatest moments in NJ XC lore as Union Catholic and Marco Langon of Bridgewater-Raritan blew up the historic 3.1-mile layout by throwing down two of the best performances in state history in a race for the ages!

And UC did this just four days after averaging 16:13 and defeating CBA in the Non-Public A race on Tuesday! What UC did is just mind-blowing!

Speaking of mind-blowing, how about what Langon did!!!

All season long the Villanova-bound stud said he was going to win the Meet of Champions and challenge the course record!

Boy did Langon ever back up his words by winning the fastest duel in meet and course history when he froze the numbers on the clock at 15:06, which makes him the third fastest runner in course history! Langon had to run fast in order to defeat Jackson Barna of Ridge, who moved up to No. 4 in Holmdel Park history with his runner-up finish in 15:13!!! Barna's time would have won all but one of the previous 48 M of C races.

This race marks the first time in course history (Holmdel's current layout has been used since 1979) that two runners ran under 15:15 in the same race.

The only two runners who have runner faster at Holmdel than Langon and Barna are two icons of the sport in the state, course record holder Edward Cheserek of St. Benedict's Prep and Joe Rosa of West Windsor-Plainsboro North. Rosa ran 14:56 at the Meet of Champions as a junior in 2009, and Cheserek broke the record when he ran 14:53 at the 2011 Shore Coaches Invitational.

This race was so fast that it produced four of the top 20 times ever run at Holmdel, a new sophomore course record, a record seven runners under 15:40, a record-tying 10 runners under 15:50, and five more guys went sub16!!! The 16 runners that ran under 16 minutes is the second most in meet history. The record is 18 from the 2013 M of C race.

Just check how deep this front of this race was.

After Langon and Barna, Shane Brosnan of Union Catholic was third in 15:22, a Union County record which is tied for No. 11 in course history, and would have won all but four of the previous M of C races. Jacob Heredia of Clifton was fourth in a school record 15:30, tied for No. 19 in course history. Jimmy Wischusen of Union Catholic ran 15:35 to place fifth and break Joe Rosa's sophomore course record of 15:38 set in 2008. Seth Clevenger of Haddonfield was sixth in a school record 15:36, tied for the second fastest time ever run at Holmdel by a Group 2 runner. Jack Tavaglione became the fastest runner ever from Voorhees by placing seventh in 15:39, No. 4 all-time by a Group 2 runner. Dennis Fortuna of Triton, 8th in 15:46, and Adam Angelone of Madison, 9th in 15:46, broke their own school records, and Jack Moran of CBA was 10th in 15:49, No. 6 all-time in CBA history.

After Union Catholic averaged 16:13, No. 9 in Holmdel Park history, in its 32-43 victory over CBA in Tuesday's Non-Public A race, there was a lot of talk about whether the quick turnaround would take something out of the legs of UC and CBA. Remember, the Non-Public A races and the boys Group 2 race were moved from last Saturday to Tuesday because of bad weather. So all the other teams in the state had a week between the Group meet and the M of C while UC, CBA and Haddonfield only had three days between races.

Well, so much for tired legs!

Union Catholic's entire top five ran even faster than they did on Tuesday, and they all closed fast to put the finishing touches on the second greatest race in meet and course history. UC's 16:01 average is second only to the 15:52 average that CBA ran at the 2013 M of C.

The Harvard-bound Brosnan led the charge for the Vikings by placing third in 15:22, 23 seconds faster than his winning time at the Non-Public A championships on Tuesday. Wischusen, who had one of the most improbable and remarkable one year improvements you'll ever see this season, was fifth with his sophomore course record 15:35, a drop of 13 seconds. Wischusen was second in the Union County J.V. race last year, and now he's running 15:35 at Holmdel! That's just amazing! The times by Brosnan and Wischusen make them the second fastest 1-2 punch for any team at Holmdel behind twins Joe (14:56) and Jim Rosa (15:15) of West Windsor-Plainsboro, who ran those times when they finished 1-2 at the Meet of Champions 2009.

After Brosnan and Wischusen crossed for UC, senior Myles Plummer placed 19th for in 16:10, a two second PR, junior Caudell Cajuste finished 43rd in 16:27, a three second PR, and then junior Ryan Cichocki put on a exclamation point on the biggest win in school history by placing 53rd in 16:34, a drop of 20 seconds from Tuesday! Freshman Evan Weber and sophomore Josh Hunsinger were UC's No. 6 and No. 7 runners.

A deeper look into Cichocki's race shows just how remarkable his performance was.

Cichocki got a bit bottled up in the first half of the race, and found himself back in about 75th place near the bottom of the bowl. But he dug down deep and made a huge move from the top of the bowl to the tennis courts, and then found another gear as he flew through the back woods, picking off several runners with his huge wheels.

With CBA's fifth runner crossing the line just ahead of UC's No. 4, UC needed Cichocki to close fast, and he delivered in a big way to slam the door.

UC coach Mike McCabe was blown away by how fast and smart his team ran.

"This is the greatest team accomplishment we've ever had,'' said McCabe. "What Sydney (McLaughlin) did by making the Olympics in high school was obviously unreal, but this is equally as hard -  to get five guys to all run their fastest on the same day, to not get hurt or sick, and make it to the line and do what they did. And the fact we ran the second fastest time ever here is just unbelievable to me. This is something I never thought we could do.''

McCabe praised the way his guys handled the pressure, and delivered their best races when the stakes were highest.

"These guys all race with confidence,'' said McCabe. "That's what sets them apart. Are they fit, yes, are they talented, yes, but how many fifth guys on a team drop 20 seconds like Ryan did after we told him that's what we needed from him. We knew if Ryan dropped like we knew he could, that we would win. He's so tough, and such a great closer. Everyone on the team ran great, and Ryan slammed the door.''

UC is done yet. Next up for the Vikings is the RunningLane Championships on Dec. 4 in Hunstville, Alabama, where UC will clash with the best teams in the country. The meet serves as the unofficial national team championship since the Nike Nationals were cancelled.

As for CBA, there really wasn't much the Colts could have done to derail the UC express.

CBA, which won nine of the previous 10 titles and owns the state record with 24 M of C titles, ran its best race of the season, averaging 16:16, nine seconds faster than it did on Tuesday, and had several PR's.

Leading the way for the Colts was the only senior in the top seven, Jack Moran, who was fifth in 15:49, 16 seconds faster than he ran on Tuesday and the sixth fastest time in CBA history. CBA sophomore. Sophomore Jack Falkowski, who made some amazing drops over the las month of the season, was 34th in 16:22, junior Nick Sullivan was 36th in 16:23, sophomore Alex Kemp placed 37th in a Holmdel PR of 16:23, and freshman Joe Barrett ran a CBA freshman course record 16:24 to finish 40th. Barrett, who lost a shoe and didn't finish the Non-Public A race, broke CBA's freshman record of 16:37 that was set in 2012 by the great Blaise Ferro.

CBA will be back in action at the Nike Northeast Regional this Saturday at Bowdoin Park in Wappingers Falls, N.Y.

CBA, coached by Sean McCafferty, came a long way from the team that we saw in early October, and with six of their top seven returning, the Colts should make a strong run at its 25th M of C title next year.

Langon and Barna have been bringing out the best in each other going back to their middle school days, so it was only fitting that the two longtime rivals pushed one another to two of the fastest times ever run at Holmdel Park in their final XC race on NJ soil. It was obvious right away that this showdown was going to be much different than last week when Langon was first in 15:38 and Barna second in 15:50 in the Group 4 race. The pace was last week when they went out in 5:29 for the opening mile.

But this time, Barna pushed hard from the gun and forced the race to go out fast as Barna and Langon hit the mile mark in 5:07! They stayed side-by-side as they hit two miles in 10:02, and then the electrifying Langon, just as he did last week, switched gears to jump ahead by five seconds after rounding the tennis courts, and then poured it on through the back woods like he always does.

"Everyone doubted me before the season started, and I when I saw that I was ranked No. 5 in the state in the preseason, I knew I was going to prove everyone wrong,'' said Langon, whose previous best at Holmdel was the 15:30 he ran at the Shore Coaches meet last month.   "This is all I've ever wanted since my freshman year, so to win this is a dream come true.''

Langon was hoping to get under 15 and make a run at Cheserek's record. 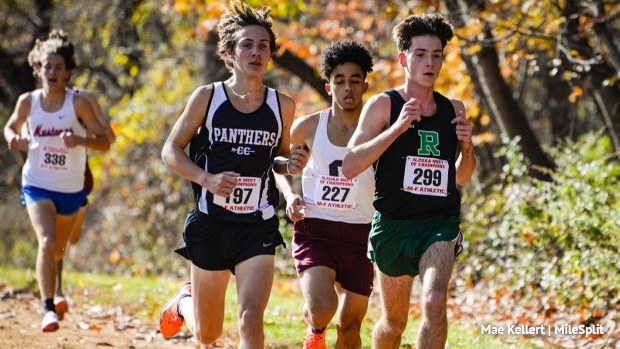 Langon said he was glad Barna pushed the pace.

"It was lot different than our last two races, but I was ready for anything and was happy to see him take it out like that,'' said Langon. "Everyone wanted to see a fast race, and we gave it to them. Barna and I have been racing since middle school, and I wouldn't be where I now if it wasn't for him. He is a great runner, and he's pushed me to be where I am today.''

Langon's season is one of the best in state history, and makes him a NJ Legend of the Fall!

On his way to being the state's best this season, Langon smashed course records at Phillipsburg and Oak Ridge Park, and ran 12:13.0 over the 2.5.mile course.

The Georgetown-bound Barna, whose said  previous PR at Holmdel was 15:50, knew he had to try something different after losing to Langon at the NJ. Sec. 2 and State Group 4 races the last two weeks.

"I couldn't run the same way that I did the last two weeks if I wanted to win, so had to take a chance and push it as hard as I could from the start,'' said Barna, who won the 3,200m at the Meet of Champions last June. "I really wanted to win, and I gave it all I had. He made the big move like he did last week and kind of got away. But to run the time I did and be that high up on the all-time list here is something I'm very proud of.''

Langon and Barna will race again next Saturday at the East Bay Northeast Regional (formerly Foot Locker) at Van Cortlandt Park in the Bronx. After what they did on Saturday, it would be shocking if they didn't qualify for the National Championship race in San Diego.