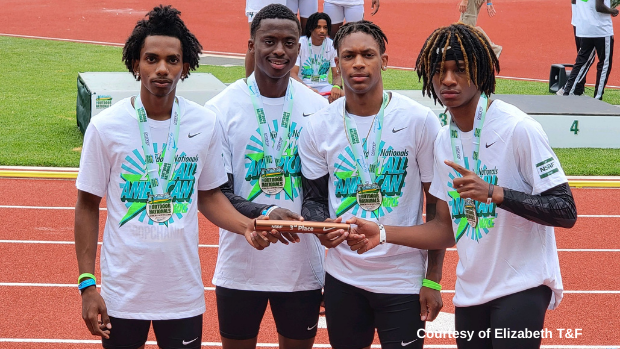 Ryan Allen captured his second national racewalk title, Nick Givan's huge anchor leg gave the Union Catholic Track Club a dramatic victory in the mixed 4x400-meter relay, and the Elizabeth boys and Holmdel girls burned up the track to highlight a strong opening day for New Jersey at the Outdoor National Championships on Wednesday at Hayward Field in Eugene, Oregon.

Allen, who just competed his junior year at Kingsway, continued his families dominance in the racewalk by winning the 3,000-meter racewalk with a monster PR of 14:28.87. Allen, whose previous best was 15:50.14, also won the one-mile racewalk this past February at the adidas Indoor Nationals in Virginia Beach.

The victory on Wednesday by Allen marks the second straight 3K racewalking title at the Outdoor Nationals for his family. In 2019, Ryan's brother, Sam, won the 3K walk in 13:31.53. Sam, who just finished his freshman year at Cornell, finished sixth in the 20,000-meter racewalk at the U.S. Olympic Trials last week. 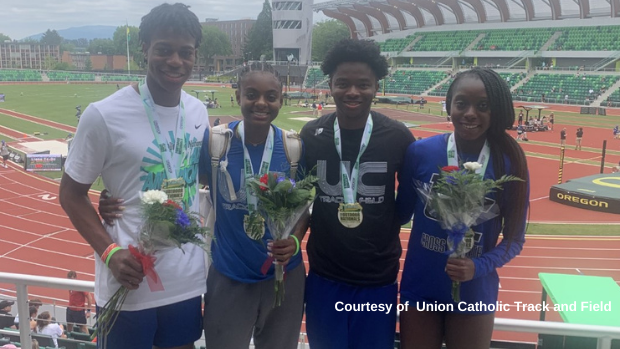 The Elizabeth boys had a huge day as Greg McQueen, Antonio Roopchand, Zyiem Lawrence, and Vance Thelemaque burned up the track to earn All-American honors in two relays. McQueen blasted a 47.69 anchor when Elizabeth finished third in the Swedish Relay in 1:57.71, and the Minutemen also placed sixth in the 800 SMR in 1:32.91. The Minutemen will seek a third All-American finish in Thursday's 4x400 where they are one of the favorites to win!!
The Holmdel girls smashed a pair of school records by finishing third in the 800 SMR in 1:47.64, and fifth in the girls Swedish Relay in 2:17.61. Sydney Goldson split 54.42 on the anchor in the Swedish Relay for Holmdel, and went 55.28 to bring the Hornets home in the 800 SMR.

Southern sophomore Fabian Gonzalez, the Meet of Champions winner in the discus, placed fourth with a PR of 186-5.

The East Brunswick boys, who received a 48.37 anchor from Jayden Phillip, placed fifth in the Swedish Relay in a school record 1:58.92.

Junior Niki Woods of Demarest, the Meet of Champions winner in the javelin, finished 10th with a throw of 145-7.

Cole Tucker of Colts Neck, who win the boys shot put at the Meet of Champions, finished 14th in the shot with a 56-9.25.

Jimmy Wischusen of Union Catholic placed seventh in the boys freshman mile in 4:26.24, the fastest time by a NJ freshman this season.