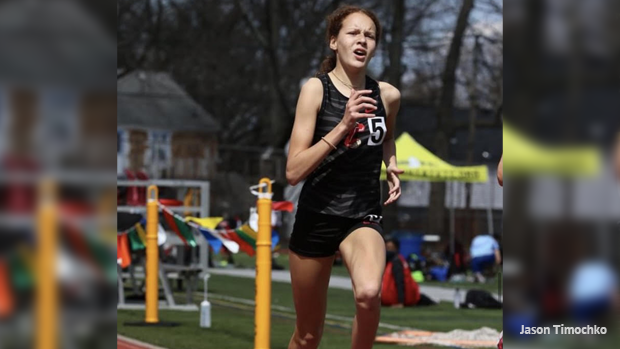 There isn't a girls program in New Jersey that can match the amount of all-time greats that Columbia has produced in the half mile.

Leading the way on Columbia's list of 800m stars are the legendary Clark Sisters, Joetta, a four-time Olympian, and younger sister Hazel, a three-time Olympian. And there's of course the great Olivia Baker, who won a state record-tying 11 individual Meet of Champions titles, and anchored two straight 4x800 Championship of America winning teams at the Penn Relays,

While the Clark's and Baker owned the 800 during their years at Columbia as all three won multiple Meet of Champions titles, Gail Bryant and Dara Crocker also won M of C 800 crowns for Columbia, giving the Essex County powerhouse five M of C winners in the event. And two other runners, Brittney Jackson and Ty-Vonna Johnson went sub 2:10 while running for Columbia.

Although she's much too young to have seen most of those stars run, Peyton Hollis knows all about them and is using all their success as fuel to carry on Columbia's great legacy of half milers by carving out her own path of greatness.

Hollis has certainly gotten off to a fast start in her pursuit of joining Columbia's pantheon of legends as the freshman phenom opened plenty of eyes by blasting a pair of NJ No. 1 times this past season.

On March 20, Hollis ran a NJ#1 1:37.24 in her high school debut when she placed second at a Garden State Track Club meet at Underhill Field in Maplewood.

A week later, she dropped a NJ#1 2:14.16, No. 14 all-time in state history for a freshman, to finish first at the GSTC East Coast Winter Championships at Underhill Field.

NJ MileSplit recently caught up with Hollis for an in-depth Q and A where she shared her thoughts on her great start, how she got involved in the sport at a very young age, her big goals, how inspired and motivated she is to add to Columbia's remarkable tradition, and a whole lot more.

So, kick back and enjoy our latest installment of Feature Friday as we shine the spotlight on Columbia's rising freshman star, Peyton Hollis.

It had been almost two years since I had raced because of Covid, so getting back on the track to race again was incredibly exciting but also  nerve racking. I am definitely pleased with my times this early in the season and excited to know they are the fastest in the state. But there are a lot of races still to be run this spring and the mid-distance competition in NJ is tough, so I am definitely focused on keeping my training up.

Are you surprised by the times you've run so far, or did you expect to run as fast as you have based on your recent workouts and your training?

Going into both races I felt prepared because my coach and training partners helped push me this winter in both mileage, pacing and intensity.  After running a time trial I knew what I was capable of, but since I had never entered a 600 before I did not have a benchmark to compare.  I definitely had target goals going into the events, but coming off so many months without races my coach had me focused mainly on my starts and pacing instead of just the times

What are your biggest goals for this outdoor season in all your different events?

My goals for this season are to definitely continue to improve my times, but also to work on my arm position, strength and conditioning. I am also excited to focus more on race tactics and gain experience from the upperclassmen and coaches on my team.

Some of the greatest half milers in state history have run at Columbia High, like Olympians Joetta and Hazel Clark, and Olivia Baker. How much do you know about those runners and the great legacy they left behind?

Joetta Clark, Hazel Clark, and Olivia Baker are all very talented track and field athletes, and it is so cool to be able to say they ran at my high school. They definitely have created a name for the track and field program at Columbia, and I hope to be able to continue the legacy they left behind.  While running Club Track, we would often see Olivia at Flood's Hill training or see her name & times on the sign outside the high school, or she would come and talk to the team about running in college. Olivia definitely has definitely served as an inspiration and role model not only as an athlete, but also as a student.

How inspired and motivated are you to continue the great tradition of track and field excellence at Columbia and carve out your own great career?

I think this is what is most exciting to me about high school. Columbia track & field carries a great tradition, and it is exciting to be a part of the program. I hope that I can help to inspire the kids in elementary and middle school to run at Columbia.

In first grade, one of the parents on my youth soccer team mentioned that Maplewood had a track program and that I should try it out. He used to coach for the Jaguars and after seeing me run he thought it might be a better fit than softball (since throwing was not exactly a talent of mine). So at the age of 6 (almost 7) I showed up for Outdoor track not knowing anything about racing and ended up loving it.

Which track and field club did you compete for before you got to high school, and what are some of your biggest victories/accomplishments as an age-group runner?

I ran for the Jaguar Track Club out of Maplewood. In terms of accomplishments, I was part of a 4x400 team (11/12) that set a meet record at the USATF Youth Indoor Championships. I must have some luck on Staten Island as I hold a building record at Ocean Breeze for the 1000 in the 9/10 age group.  I was a USATF NJ Athlete of the Year for mid-distance 2x and my 4x4 team was also recognized. I also competed (and placed) at several USATF State meets, and at AAU Club Championships in FL. When would you say you had your first huge breakthrough moment when you realized you could be a very good track and field athlete?

I never truly had a big moment that I remember, but I'd say as I continue to advance in track I surprise myself more and more. If I had to name one moment in my track career that I remember feeling accomplished it was definitely during the season right before Covid hit (2019). I remember telling my parents that I wanted to break 2:20 in the 800 because I was so close each time. The day I accomplished my goal, I felt like it really helped me realize that I was a good runner. All my feelings of doubt were gone and I understood that if I pushed myself hard enough, I was capable. This was really a breakthrough moment for me because not only did I get over the physical challenges, but I also faced the mental hurdles that were standing in my way.

Do you play other sports or is track and field your only focus year-round?

I do play other sports. Besides track I play soccer at Columbia, basketball (when I was younger, but I still enjoy playing it even if I'm just goofing around), and I ski/snowboard for fun as much as I can during winter.

Track has been a huge part of my life for so many years, and it really does play a role in how I view things. I mostly enjoy the community that track has to offer. I never once have felt out of place, and I really do think that my teammates and coaches act as a second family to me.

What do you consider your greatest strength as a track and field athlete?

I believe that my greatest strength is my consistency in training and trusting my coaches through the process even when the workouts are really hard.

What's your favorite race to run and why?

Definitely the 800. I love to run it because you had long enough to settle in, but it isn't too long (except indoors when instead of 2 laps it is 4 even if it is the same distance). I also love running relays with my team.

When is your next meet and what will you be running?

You will have to ask my coach that question. Right now I am just focused on my training and hopefully helping my team bring some Championships to Columbia! I'm sure I will have a meet soon but my hopes are just to perform my best no matter what event I'm running.

Who is your favorite college/pro track athlete to watch and why? And what have you learned from watching them?

I really love watching Donavan Brazier race. I have seen him twice at the Millrose Games, and he is amazing to see his pacing and crazy kick. I also love to cheer for the fast NJ women, like Ajee' Wilson, Athing Mu and Olivia Baker.  Whenever they are racing, I am watching. How amazing would it be if they all made the Olympic team this summer for the 800! I really enjoy seeing them improve and they are all incredibly talented.

What are your biggest long-term goals in track and field for high school, and college and beyond?

My biggest long-term goal is definitely to run in college as a mid-distance runner. Since we haven't been in school this year (my town has chosen to teach virtually), it is weird to think that this is the spring of my freshman year already.

Like I said before, I do like to play soccer and snowboard but the interests that I have outside of track and school would be things like drawing, hiking, traveling and writing.