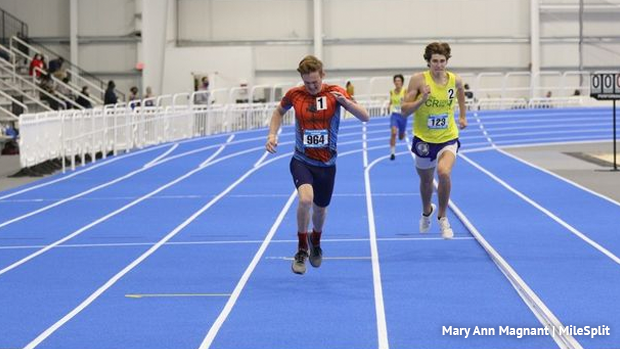 There are so many great track and field athletes in New Jersey, but who is the very best of the best? Well, when you combine speed, power, stamina, agility, and versatility the answer right now is Connor Munson.

In case you missed it, the junior multi-event star at Westwood turned in remarkable performance in the decathlon last week at the NSAF Meet of Champions in Myrtle Beach, S.C., placing second with a Bergen County record-tying 6,197. That also ties Munson for No. 10 in state history. Munson equaled the Bergen County record of 6,197 scored by Mike Stansfield of Garfield in 1999.

Here's a breakdown of Munson's 10 events at the NSAF.

NJ MileSplit recently caught up with Munson for an in-depth Q and A where he shared his rigorous training, his big goals, how his mother got him started in the multi-events, how a fall in his first race as a little kid helped shape him, and a whole lot more.

So, kick back and enjoy our latest installment of Feature Friday as we shine the spotlight on Westwood star Connor Munson. NJM: First off, congrats again on your Bergen County record-tying 6,197 points, which is also No. 10 in state history. What does it mean to you to be the King of the Multi-Events in Bergen County? It must be a great feeling.

I feel pretty good about it! I wouldn't call myself a King just yet, but I am working on it! It was not on my goal list for this meet, so it's an extra added bonus!

How about being No. 10 all-time in state history, Connor? How exciting is that, and what does that mean to you?

My ultimate goal is to be number one in the decathlon, and this is a great place to be at the beginning of my junior outdoor season.

Your 6,197 points is more than 200 points over your previous best from the Ascender meet in Florida last month. How surprised are you by how well you performed or based on your workouts did you sense a big performance like this was coming?

I am not surprised at all. I have been working hard to break 6,000 points. My goal for this meet was 6,200 and I felt that it was achievable based on my meet in February (5,976 at the Ascender Invitational) and my training.

It is very hard to PR in any events during a multi because of how many events you have to do in a competition, and your focus for training is so diverse. When Coach (George) Glover told me about the meet in Ponte Vedra in November, my training program changed from cross country to decathlon. This meant still running for cross country, and putting my specialty training in place. Since then, I have practiced anywhere from 3-6 hours a day, seven days a week with only a day off every two weeks.

What are your biggest goals for this outdoor season? With every PR comes new goals that I am sure you put out there for yourself to push you even harder toward certain time and marks? You certainly have the potential to keep putting up great time and marks in all your events!

My goal for this outdoor season is 6,500 points. This would require me to get more PRs, including 6-2 in the high jump, throw 40m in the discus and javelin, and jump 6.5 meters in the LJ.

Unfortunately, there wasn't an outdoor season last spring because of COVID-19, so you didn't get a chance to compete last spring. How challenging was that and how tough was it mentally to deal with?

At first, I kept running, I kept doing workouts. However after we found out that all the big national and international meets were cancelled, I lost focus and didn't feel like I would be training towards anything so I stopped for about a month. I didn't feel like the training would be worth it. However, as soon as Dave at High Intensity Track in Fairfield decided to reopen, I regained the wind in my sails.

What type of things did you do to stay sharp since last indoor season? What kind of training/drills did you do?

At the beginning of the lockdown I was running about three miles everyday and doing calisthenics training to keep my strength. In May, I stopped training because of the headspace I was in. After I got back in the right headspace in June, I simply did not stop training.

There aren't a whole lot of decathletes in high school, so how did this all come about? When and how did you decide to pursue becoming a multi-event star?

When I was 11 years old, I didn't qualify for the USATF Regional meet in any individual events. Since my brother, Stephen, did qualify and the multi events automatically advance to the regional meet, my mother didn't want me to be bored, so she entered me in the pentathlon because I already did most of the events. Ever since, I have been doing the multis.

A follow up to the last question-when and how did you get involved in track and field in the first place? Did you compete for a club team before high school?

Before high school, I competed for the Roadrunner's Elite Track and Field program. I started in kindergarten when I was five. I did many sports like football, basketball and lacrosse, but in seventh grade I decided to purely focus on track.

Ten events in two days can be very grueling, especially when you have to finish it off with a 1500. What is the toughest part about being a decathlete?

I find the training and competition so much fun, despite it being so physically taxing and demanding. However, I believe the toughest part about being a decathlete is compartmentalizing one's emotions during a competition. For example: If I do poorly in one event, I can't allow that to interfere with the rest of my competition.

What I love the most is the friendships made during the decathlon. After spending 2 whole days competing against one another, we all come out of it being best friends. We have an Instagram group chat with the top athletes in the country to keep in contact with one another.

What's your favorite event and why?

My favorite event to compete in is the pole vault because it is the closest I'll ever get to being Spider-Man!

Which event has been the most difficult and toughest to prepare for and excel at and why?

The javelin. I have never liked the javelin, not because I was never good at it, just because it wasn't fun. Nowadays, it is difficult to get better because I do not enjoy it. It is the biggest issue with my decathlon score

What do you consider your greatest strength as a track and field athlete and why?

My determination to always go 100%. If you're not giving your workout 100%, you're not improving.

When would you say you had your first huge breakthrough moment when you realized you could be a great track and field athlete?

When I was in kindergarten, my very first race ever was a 50 meter dash. I fell in the middle of my race and got major track burn. As I was crying, I stood up and finished my race. This was my first show of determination. Looking back, I feel like this is the moment I realized I had what it took to excel at anything I put my mind to.

When and where is your next decathlon?

What is practice like for you? Do you work on throws one day, jumps another day/ sprints hurdles another day etc.

During the week, at regular Westwood practice, I do whatever workout coach Glover gives. After that practice, I go to Fairfield to train specialty events like the HJ, hurdles, ect. with Coach Dave Lado at High Intensity Track. On Saturdays I go to pole vault practice and do a heavy lift with Coach Andrew Flores at Apex Vaulting. On Sundays, it is either a rest day or I train again at H.I.T and throw with Coach Dan Mecca.

Who is your favorite college/pro track and field athlete to watch and why? And what have you learned from watching them?

Kevin Mayer is my favorite pro track and field athlete. He is the world record holder for the Decathlon. I learned to yell after all my throws to get more power.

The camaraderie between athletes that are on opposing teams is unparalleled by any other sport. I think this is amazing. The fact that complete strangers can enter a competition and leave being best friends.

What are your biggest long-term goals in track and field for high school, and college and beyond?

My largest goal is to compete in the 2024 Olympics is Paris, France. Second largest would be the 2028 Olympics. In high school, my goal is to score over 7,000 points and to be #1 in America.

What type of things do you like to do when you're not practicing, compete or doing schoolwork? Have any hobbies or are you involved in any other sports or clubs/activities at school?

I have recently completed my Eagle Scout Project and am a leader in my Boy Scout Troop. I am a member of the French, Math, and Science Honor Societies. When I find myself with any minimal downtime, I like to watch Netflix.