The Willingboro boys and girls teams, fueled by three gold-medal performances each, swept the team titles for the second straight year at the NJSIAA State Group 1 Relay Championships on Wednesday at the Bennett Center in Toms River.

The Willingboro girls, which snagged three first-place finishes on the track, including a smoking performance in the shuttle hurdles, totaled 43 points to beat runner-up Audubon (26) and third place New Providence (20). This win, their second in a row, also moves the Willingboro girls into first all-time for State Relay titles won at 11, advancing ahead of Columbia and Hopewell Valley at 10 each.

The Willingboro boys, which won their fourth straight title, swept the three field events and nearly doubled the field, scoring 50 points while runner-up Camden had 26 and third place Audubon had 24. They have the second most titles all-time now with 17, only behind Christian Brothers Academy. 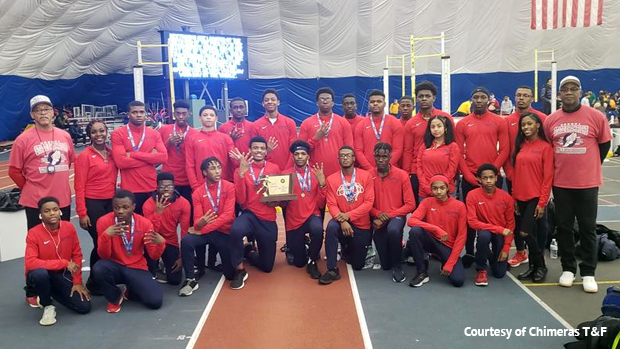 Junior Balkis Lyiola contributed to all three winning relays for the Willingboro girls, including the shuttle hurdles, which included seniors Mikell Dolo, Tamia Welch Smith and Afusat Iyiola and finished in NJ#8 33.38.

For the Willingboro boys, who swept the field events, seniors Kameron Smith and Nate Robertson both cleared 6-4 in the high jump and led the field; Smith already owns a NJ#2 6-6 this season and the duo came in as the best high jump relay in the state. Smith also contributed to the second-place 4x200 relay (1:35.70).

In the pole vault, senior Dontavis Wilson tied for the best individual mark (11-0) and teamed with junior Glenn Ferguson (9-6) for the victory. In the shot put, sophomore C.J. Johnson (50-4) and junior Deonte Allen (48-1 ½) were second and third overall individually but pulled out the team win in the relay.

Double winners in the boys meet were Camden and Pitman.

Pitman sophomore Cole Sharpnack and seniors Thomas Jackson, Tyler Jackson and Sebastien Reed won the 4x800 in 8:33.46 and the distance medley in 10:48.78. Reed getting the job done with a commanding run in the DMR 1600m anchor leg.

The University HS boys upset higher seeded teams in the shuttle hurdles winning the event out of heat one with a 34.24.

While Willingboro had the title locked up at this point another exciting race occurred at the end of the meet in the 4x400m. Metuchen battled back for the win clocked at 3:34.18 to Willingboro's 3:34.69.

On the girls side in the high jump relay A. L. Johnson's Carly Tarentino and Sarah Scepkowski combined their 5-06 and 4-06 jumps for the win.