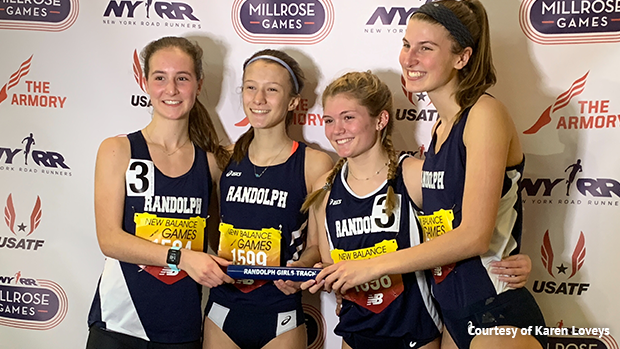 Luis Peralta of Passaic sliced nearly a second off his US#1 time in the 600-meter run and the Randolph girls moved back to the top of the state rankings in the distance medley relay at Saturday's New Balance Games at the 168th Street Armory in New York.

Peralta, who announced his commitment to the University of Oregon earlier this week, ran a sizzling 1:19.14 to win the three-lapper and move into No. 14 on the all-time U.S. list.

The Randolph girls, who decided to compete after the State Group 4 Relays scheduled for tomorrow were postponed until Wednesday, reclaimed its spot as the fastest DMR team in the state with a victory in a NJ#1 US#3 12:08.76.

The Rams received splits of 3:43.87 from junior Meredith Finley, 61.73 from sophomore Chloe Whiting, 2:29.92 from freshman Maya Wilkins, and 4:53.25 from Princeton-bound Abby Loveys, who got the baton five seconds behind in fourth place before mounting her comeback. All four runners for Randolph ran indoor PR's.