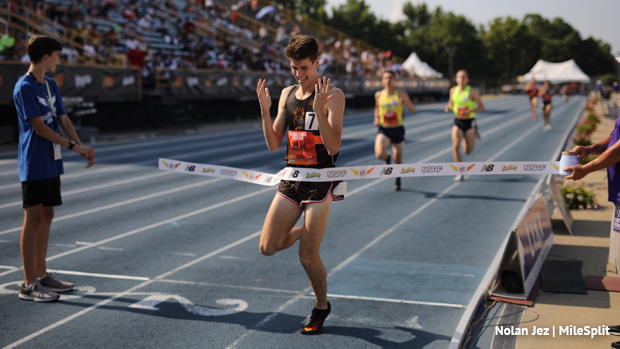 Sean Dolan of Hopewell Valley, the New Balance National champion in the mile last June, threw down a US #1 and NJ #3 all-time perfomance in the 1,000-meter run at the New York Road Runners Night at the Races on Thursday at the 168th Street Armory in New York.

Peter Callahan, a former star at Princeton University, won the race in 2:24.05. Chris Hatler, who starred at Pope John High School and UPenn, was second in 2:24.25, and Daniel Winn, a sub 4 miler who starred at the Universty of Oregon, was third in 2:24.43

Earlier this week, Dolan, received an invitation to run in the high school mile at the Millrose Games on Feb. 9, which is the same day that Hopewell Valley is competing at the Central Jersey, Group 3 meet at the Bennett Center in Toms River.

Hopewell Valley coach Aaron Oldfield said on Friday that the plan is for Dolan to run at Millrose, just like he did last year.

Last spring, Dolan put the finishing touches on a remarkable outdoor campaign with a sizzling double at the New Balance National Outdoor Championships at the University of North Carolina A&T in Greensboro, North Carolina.

Dolan's personal best in the mile came when he ran 4:08.86 last May to finish second at the adidas Boost Boston Games, and the Penn Relays in April he blasted a monster 4:07.57 to anchor to bring Hopewell Valley from way back to capture the DMR Championship of American title in a meet record 9:57.77.