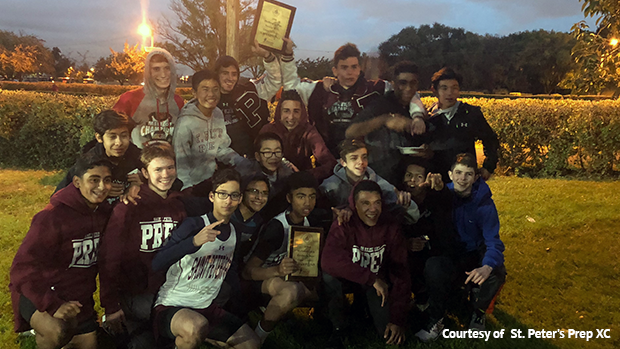 The boys race at the Hudson County Championships on Friday was one for the ages as bothc course  records came crashing down at Steven Gregg Park in Bayonne.

The boys individual showdown between Francis Martingale of Memorial (West New York) and St. Peter's Prep sophomore Edwin Klanke was an instant classic as they ran together the whole way before Martingale kicked ahead with 300 to go and stopped the clock at 15:29 to take down the course record.!!! Klanke was second in 15:30 as six runners broke 16 minutes!

Martingale, seventh last year, and Klanke, sixth last year, both went under the course record of 15:31 that was set last year by Fahd Nasser of McNair, who went on to the state Group 1 title and qualify for the Foot Locker Nationals.

With Klanke leading the charge, St. Peter's Prep also made history by destroying the course record average with a red hot 16:09 on the way to its second straight title, 40-63 over runner-up Memorial.

On the girls side, St. Dominic Academy won its second straight title, and Claire Chapeau of McNair finished first with a big PR of 18:35.

Chapeau, fourth last year, won the race by 70 seconds over Delaney Rice over Weehawken, second in 19:45.