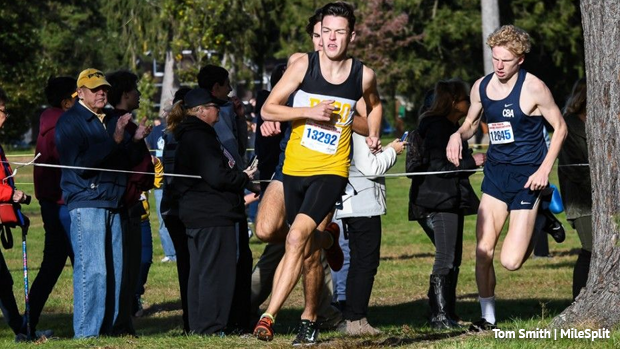 This was a very quick race up front, not only did Devin Hart run #2 all-time at Ocean County Park with his 14:47 but Tim McInerney moved up to #8 all-time as well under 15 minutes at 14:59! Hart, McInerney, and Shaw Powell were all battling up front early,  with McInerney and Hart going through the mile around 4:29!

Hart was just off the course record of 14:43 set by CBA's Mike McClemens in 2013. Remarkably for this multi-season Meet of Champions winner this was Hart's first Shore Conference title. The first for a Pt Pleasant Boro individual since 1991 when Terence Fagan won running 15:24.

Monmouth Regional senior Amanda Stone became her school's first Shore Conference Champion. She battled back from a fourth place finish at Monmouth County to run 17:54 and win the Shore Conference title. Stone was a top returner from last season at Holmdel Park and hopes to have a big state meet season in November.

Also having a great fall is Delia Russo of Colts Neck who finished second at 18:04, she won Monmouth County Championships last week and has really taken to the #1 role on the NJ#9 ranked Colts Neck squad who placed second at this meet.

Colts Neck wasn't the only state ranked girls team in this race, the winning score pointed right to NJ#5 ranked Holmdel HS. The Holmdel girls have really taken this season by storm, winning their first Monmouth County Championship title in school history last week and following that up with their first Shore Conference title. They've really proven their stock and moved up the state ranking through performance.

There are no seniors on this squad, so keep an eye out for Holmdel Park moving forward! You can watch their team interview here.