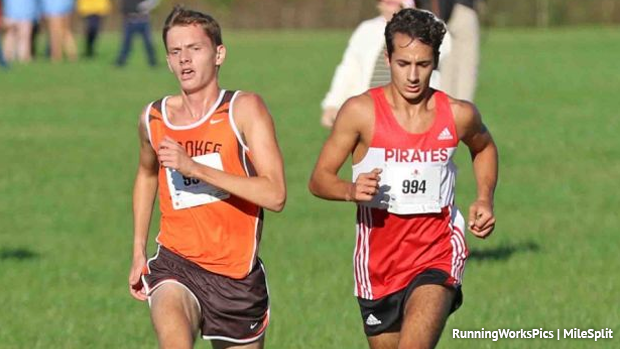 Shawnee, despite competing without two-time champion Isabella Turner, still won its sixth straight title and county record 24th overall with a 49-62 victory over Cherokee. Shawnee trailed Cherokee after each team had four runners across, 29-31, but Shawnee's No. 5 runner, Maddy Yeager, finished 14 places ahead of Cherokee's No. 5 runner to secure the victory.

Rathman, a junior who was second last year, took advantage of the absence of the sidelined Turner to runaway with the girls individual title in 18:55, 35 seconds ahead of runner-up Claire Hauser of Shawnee. Rathman's time is the third fastest at Mill Creek behind Megan Lacey of Cherokee, who ran 17:53 in 2010 and 18:53 in 2011.

In the boys race, NJ #4 Cherokee held out one its top runners (Chris Spisak) and still rolled to a 27-51 victory over runner-up Lenape for its fifth straight title. Cherokee went 2-3-5-6-11 and averaged 16:39 as the Chiefs captured its 18th title overall, which all have come in the last 24 years.

The boys individual race featured an epic battle between Gabay and junior Ethan Wechsler of Cherokee with Gabay using a strong finishing kick to edge Wechsler, 15:56 to 15:57. Gabay, third last year, is the fifth boy from Cinnaminson to win the Burlington County Open, but the first junior ever from his school to finish first.