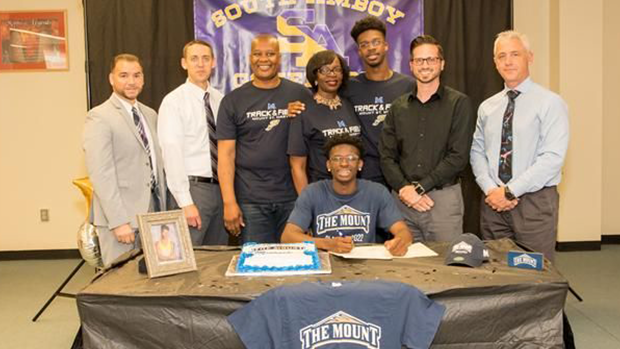 It was Valentine's Day, February 14, 2018, competing in my final indoor race as a senior in the 200m race, even though I had to skip a date to run it, I'll never forget this one.

The significance of this particular race was that I was coming off having missed my entire junior year of indoor & outdoor track due to a broken leg (tibia and fibula). Given the severity of my injuries, I not only thought my days of competitive athletics were over, but I wouldn't ever be able to walk normally again.

I was coming off of a 55m race a little earlier as my usual warm up event, then not feeling my best because of the sushi I had ate earlier that day, but later on, I had a gut feeling this 200m would be good because, I finally had a lane that wasn't lane 1 (I got lane 5). I ended up running a significant PR. I ran this phenomenal race with only a half a year of training without a noticeable limp and no agonizing pain since running indoors with its tighter turns places more stress on one's legs. This race really opened up my eyes that my come back was real, rehab was working, but I also knew I had to be patient with myself, while realizing I have much potential in this sport, since, not too long ago, I could barely walk 200m without support or crutches because the pain was so unbearable. This race allowed me to close out my comeback indoor season on such a high note.

In all the years I've competed, I must say the biggest competitor / opponent has always been me, myself and I. In reality, I know the only one who can hold back my potential is myself. Of course, others can make it more difficult and challenging, but in the end no one else can stop me but me.

Overcoming a broken leg (tibia and fibula) obtained during my junior year of competing in my GMC Soccer Tournament that caused me to miss my entire junior track season, made me very aware that I had a lot of work to do to mentally, physically, spiritually as well as emotionally to try to come back strong. Being from a small school, without a track to practice on and no equipment room to help get me back into top shape, in the end, I was still able to accomplish one of my major dreams.

Starting this fall, I will be running on a D1 track team at Mount Saint Mary's University, 2018 NEC Men's Champions, which is the greatest accomplishment and opportunity that any athlete would want. From a South Amboy perspective, this year, I'm the only D1 athlete in our entire high school signed to compete at the college level and the second D1 athlete of all time in the school's track history.

Although, I haven't run the 800m since 10th grade, I'm still the 4th fastest 800m runner in South Amboy High School history. All of these accolades landed me the prestigious honor of being named South Amboy Athlete of the Year.

I got into track as a hobby, ironically as a 400m runner, because the premier soccer club I was currently playing with didn't compete in a winter futsal league. I needed something to do to keep up my stamina and athletic skills. My friends convinced me after school to drop by, while there I met Coach Mecca and worked out with the team at their track practice. That was my introduction to track. I've played soccer since I was a very young boy; I was a varsity starter since my freshman year, played multiple positions on the team as a right winger, mid fielder and top defender who was named all conference player.

After several track practices and conversations with Coach, I decided to join the track team during the winter season of my freshman year while still being a starting player my high school soccer team. I eventually found my love as a sprinter, running events from 55m through 400m. In hindsight, if I could change anything about my high school career from the start, I would've taken my freshman year of track more seriously. Instead of viewing track just as something to do as a hobby, I would have recognized early on that I was a dual athlete that needed to play both sports at my best optimal competitive level.

The most difficult obstacles besides overcoming the physical component of my injuries, a broken leg in two places, were overcoming the mental and emotional barriers, especially the fear of thinking that my leg would not hold up during rehab and workouts. This situation caused my rehab team, (Orthopedic Specialist, my family, friends and I), to think out of the box for ways to workout, to try and regain my sense of balance, coordination, strength and conditioning back to a competitive state of mind. I had to challenge myself to remain positive, get out of my own way and allow my strength and courage to shine through. 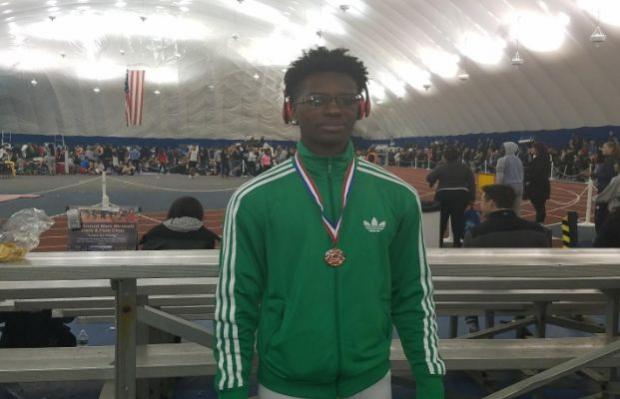 Since I come from a small school, what I will miss the most is the close knit family feel and atmosphere that I have come to embrace and appreciate over the years. Because of the support of many, I flourished extremely well during my high school days and the time spent with present and former teammates, classmates, and other competitors I've met along the way at numerous track meets and events will be deeply missed.

It's easier said than done, but don't let not having everything you think you need to succeed (like not have a track) stop you from trying your best. I'd tell all the younger athletes to always give 100% effort because you never know what you'll end up being good at, so don't cut your potential short by giving little to no effort. You can have all the potential in the world but a harder and more consistent worker in the long run will more often beat you every time in life.

My Coach Anthony Mecca has always been a huge support, who wants the best for me while pushing me out of my comfort zone. He encouraged me and consistently shared with me that he knew I'd make a comeback to track. He believed that I would be better than I was before my injuries, even when others doubted me. Coach Mecca is a vibe that I will miss when I go off to college. Looking forward, I have good expectations going under the wings of my new Coaches at the Mount.

I'm very excited to be part of the class of 2022, attending Mount Saint Mary's University in Emmitsburg Maryland. At the collegiate level, I will be attending as a Presidential Academic Scholar, having been accepted into The Mount Honors program as a George Henry Miles Honor Society student. At the athletic level, I am joining the rich history of the prestigious Mountaineers track team as a sprinter. I'm considering pursuing a major in Business Management with a minor in Cyber Security.

First and foremost, none of my accomplishments and achievements would have been possible without the dedication, love and encouragement of my family. There are not enough words that can begin to express my gratitude for the long drives to get to out of town meets, driving me to late night practices and videotaping my workouts morning, noon and night all while supporting me unconditionally. Thank you!

In conclusion, never forget or be ashamed of where you come from, nor forget your humble beginnings. I'm actually very grateful for my life altering injury that reshaped my character for the better. It really helped me to truly understand and appreciate what I've been gifted with in life. Also, how easily it could just be taken away. This really taught me how it feels to be someone who has to rely on others in order to survive or have a normal lifestyle. It made me fully realize all the things I may have took for granted, especially walking. I didn't realize how difficult life could be without being able to care for myself, not being able to do certain movements whenever I wanted too. This experience opened my eyes, how important family is, and how quickly life can take a turn for the worse. I now have a newfound respect and a sense of empathy to assist people with disabilities.

South Amboy High School, although it may be small in size, we have a lot of heart, we dream big and have each other's back. I appreciate all they have helped me to achieve both academically and athletically. I wish South Amboy High all the best.