Wednesday morning the NJSIAA released the opening heights for the Meet of Champions scheduled for Saturday, June 9th at 2:00 pm. If you are a fan of the pole vault make sure you make your way to Northern Burlington to watch some amazing vault battles in the making.

I've also included a look at the top seeds for the pole vault and high jump below the listed opening heights. 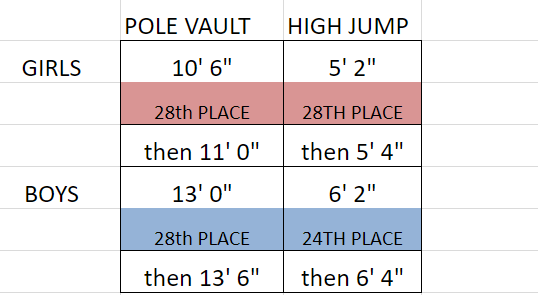 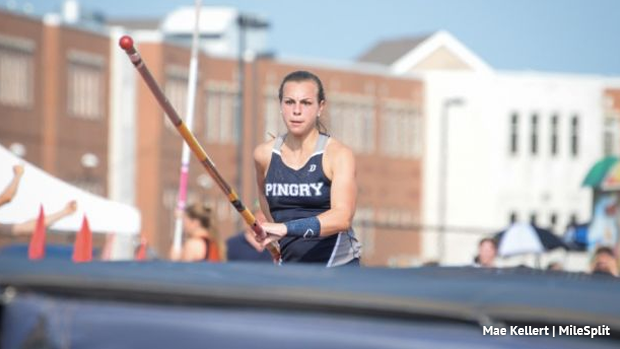 The meet record of 12-06 held by a number of individuals over the years may be in jeopardy this Saturday. The indoor Meet of Champions winner Haley Horvath of Notre Dame and Caroline Dannenbaum of Pingry had a battle for the ages at Group Championships where they both cleared 13-00, Horvath won the NPA state title on a tie breaking number of vaults. Meanwhile at the other Group location Ashley Preston of Delsea won the Group 3 and Sydney Woods of NV Demarest the Group 2 title both clearing 12-06. On top of that NJ#4 ranked Melissa Purcell of Pascack Valley is the top returner from last year's MOCs, while she cleared 11-06 at Groups she went for 12-07 to win her Sectional this season.

Liam Landau of Pascack Hills absolutely vaulted himself into Meet of Champs title contention Saturday at Group Championships when he cleared 15-07.5 to win the Group 2 state title. The junior's best going in was 15-01 from Bergen MOCs in mid-May and 14-06 the week before that! Indoor Meet of Champions winner Tyler Hrbek of NV OId Tappan comes in sharing the second best height of groups at 15-00 with Hunterdon Central senior David Bausmith, both winning their respective state titles. Top returner from last spring's MOCs is Hrbek's teammate Seth Kricheff with a top height of 14-00 this outdoor but has the ability to get over the 15-00 bar as seen this indoor.

Sophomore Simon Schenk of Princeton, Adam Stavash of Hasbrouck Heights, and Nico Morales of Delsea also among the top seeds.

As a freshman last spring Jenna Rogers of Rutherford exploded onto the national scene winning the New Balance Nationals Outdoor meet with a 6-0.75 clearance, the week before she had placed third at the Meet of Champions over the 5-08 bar. She lookes to gain her first outdoor Meet of Champions title this time round, she won the indoor title this past February.

So far in 2018 Rogers has cleared 5-10 but she isn't alone there as junior Tiffany Bautista of Paramus Catholic matched that height last weekend to win the NPA Group title. That was a three inch overall PR for Bautista and a four inch outdoor one. Both girls haven't lost this season and we could certainly see the MOCs meet record of 5-10 at least matched if not broken if the competition escalates athletic ability on Saturday.

It doesn't stop there, the high jump is an any given Saturday event. Last year's defending champion Abrianna Barrett of Montgomery enters Saturday with the third best height from Groups at 5-06 which won her the Group 4 state title. Barrett stepped up her game at MOCs last spring to secure the win with her career best of 5-10.

One of the few seniors near the top of the ranks in the high jump, Kassidy Mulryne of Allentown is riding three straight victories into MOCs having just won her first Group 3 state title with a PR of 5-08. If she is peaking at the right time and she could also pull out the upset victory Saturday.

Multi event talent Tierra Hooker of Timber Creek was second to Barrett at MOCs in 2017 and is once again in the mix for gold this year. Second to Mulryne at Groups last weekend while clearing 5-06, Hooker has a best height of 5-07.25 on the season and a career best of 5-10.

Last year's outdoor Meet of Champions winner for the boys has graduated and the top returner from the meet James Bell of West Side once again finds himself in the mix for gold.

Three boys cleared 6-06 at during Groups weekend including Bell, Mark Anselmi of Middletown South, and Franklin Township's Chibundu Nwanonyiri. Bell has season best of 6-07 while Anselmi and Nwanonyiri have both been over 6-08.

The state leader this season is Jadon Watson of JFK Paterson who cleared 6-09 at the Penn Relays, he was a close second at the indoor Meet of Champions and went on to finish fifth at New Balance Nationals Indoor jumping 6-10.75.

The indoor Meet of Champions winner A'Nan Bridgett is among the top seeds out of Groups and ranks tied for NJ#6 this season at 6-08. Others such as Davenksy Joinvilmar of Asbury Park, A'Irrion Scott of Ewing, Kyle Shine of Old Tappan, Zach Aanstoots of Pingry are also in the mix.