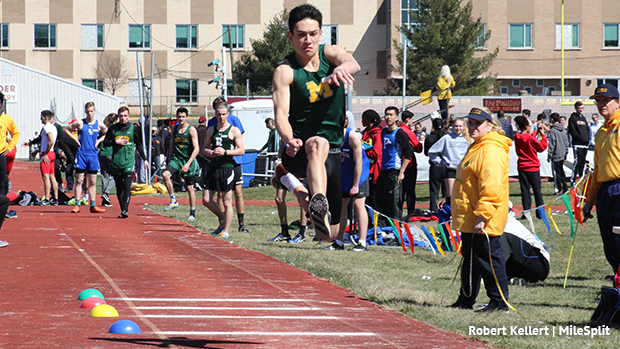 Here is the results and coverage board from week 1 of the 2018 season. Quick highlights and links to full results and more coverage can be found below.

We would like to wish every athlete, coach, and team the best of luck entering this year's schedule of competition. The varying track and field events, though different in technique, all focus on athletic prowess as well as the willingness work hard and perfect your trade. Each week meets around the state and country will crown their best athletes and each week lessons will be learned by all competitors, those who find success as well as those with bumps in the road. The ability to use those lessons grow and focus on the overall picture will help lead to the success of your season.

Results and Week 1 Round Up

If you capture any winning or interesting highlights on video send them in to our social channels or email rkellert@milesplit.com. Help us capture all the great moments, never know if they end up featured on the site!

Sean Dolan continues his momentum starting off his outdoor season with a great win in the mile running 4:14.37 after a huge kick. The Hopewell Valley junior finished the indoor season in great form with a fourth place finish at New Balance Nationals Indoor running 1:51.77 in the 800m. Check the full recap above for more on the mile including the race video.

West Orange had a big day winning the boys and girls Large School divisions, the boys title coming in a close one separating the top four teams by only 3 points. The West Orange girls ran a meet leading 2:23.90 in the 1K Swedish Relay, check out their full team performance here. The Small School divisions went to the Snyder girls and Secaucus boys

The Ridge mid-distance girls, coming off another successful indoor season, open in strong form with their 4:14.85 SMR leading the state by four seconds. In the boys discus Paul Brennan is well ahead of schedule compared to his previous seasons, the Princeton junior threw a state leading 169-10 and his PR from last season at Sectionals is 173-05.

Bridgewater Raritan had two girls clear 10-06 in the pole vault both tied for NJ#2, seniors Cristina Young and Heather Gaughran. Sophomore Mahogany Jenkins of Watchung Hills opened with a 36-07.25 NJ#1 in the triple jump, she was third at last year's Meet of Champions as a freshman.

Union Catholic's Brandon Patterson leads the state in the shot put after his 55-03 on Saturday, the only NJ boy over 55 feet recorded so far. The boys pole vault saw Bradley Jelmert of Watchung Hills clear 14-0.25 as well. That's a huge PR for the sophomore who came into the season with bests of 13-06 indoors and 10-08 outdoors. Ryan Cashman of Montgomery looks like he is in state season form clearing 46-06.25 in the triple jump for a PR and NJ#1, he was fourth at the Meet of Champs last spring. 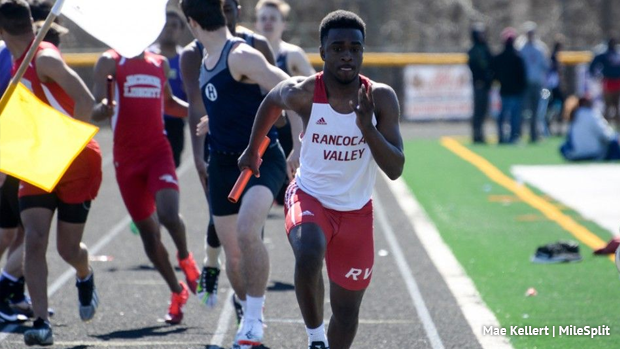 Nickolas Mirabelli launched a massive javelin throw to start his spring campaign with a mark of 220-10. That is fourth all-time for New Jersey, see the throw and read the full recap on his performance here. Rancocas Valley's boys SMR squad also ran strong winning with a time of 3:41.97 NJ#1. Holmdel boys shuttle team is flexing early with their NJ#1 1:01.69.

The girls side saw Red Bank Catholic win the SMR with a solid 4:18.15 NJ#2. Aniyah Russell of Jackson Liberty cleared 17-07.75 in the long jump to lead the state early on, over two feet and five increased from last year for her at this meet. We also saw state leading field marks in the discus, Bryanna Wilson at 117-10, and javelin, Gennyka Liebenthal at 126-04. Christianah Akinsanmi of Howell threw well in the shot put at 40-0.25 NJ#2.

Katherine Muccio of Ridgewood picked up where she left off in the 400m hurdles last spring running a converted hand time of 1:02.84. She is the NJ#2 returner among times from last spring with her 1:01.87 from the Meet of Champions.

Fresh off a third place finish at the indoor Meet of Champions Melissa Purcell of Pascack Valley gets an early jump on the state pole vault rankings clearing 11-06 for NJ#1.

Connor Scaglione of NV Demarest threw 52-10.5 to lead the meet in the shot put and ranks NJ#3 after week 1. He has eight straight meets now over 50 feet.

Check out the 129-04  NJ#1 javelin throw by freshman Alianna Eucker of Bergen County Tech! The best frosh throw in the Nation so far for this young 2018 spring season. That is also the best New Jersey freshman throw we've seen since Brielle Smith of Oakcrest threw 135-1 at Group Championships in 2016. According to Paul Schwartz that is #22 all-time in Bergen County and a school record as well.

Junior Tiffany Bautista of Paramus Catholic also took over a state leading spot with her 37-09 in the triple jump. That went along with her participation in the 1:01.94h winning shuttle hurdle relay.

Jasmine Vannote of Sayreville threw 37-07 NJ#5 to win the shot put. Sayreville as a team had a big day at this meet leading multiple events, check their squad's report here.

Some great performances from this meet! Highlights coming soon.

No results available for this meet yet. 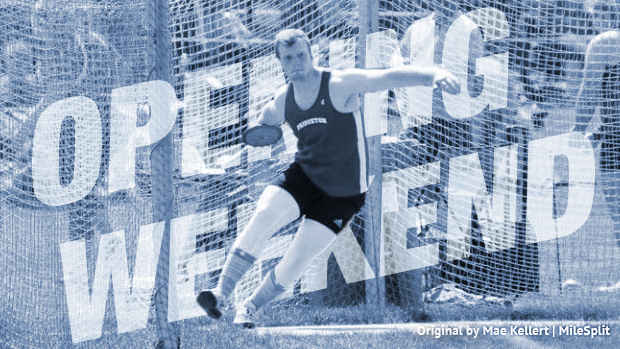