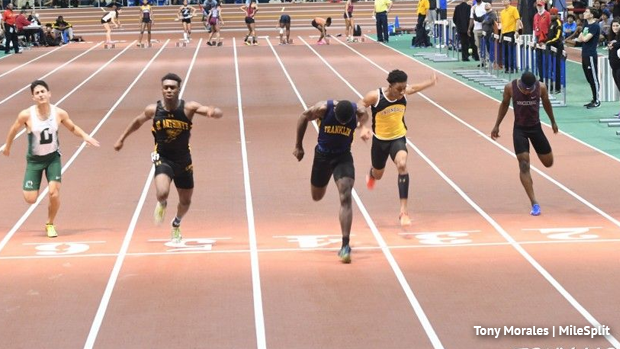 Tonight was a major breakthrough for Mario Heslop, a junior from Franklin Twp. First he sprinted to a time of 6.26 to win the 55m dash tying a New Jersey state record, breaking the meet record and taking over US#1. Then he came back in the 200m finals to leave the field behind with a fiery state record 21.09!! Both performances went down at the Eastern States Championships in New York on Tuesday night.

Before the final he had clocked in at 21.39 during prelims which temporarily only left Taylor McLaughlin's 21.37 and Adian Sanderson's 21.34 ahead of him.

Mario Heslop blows up the 200m at Easterns, winning in a new @NJMileSplit State Record of 21.09. Tahje Flemmings of Banneker also under the NY State Soph Record with his 21.89 to take third!

The 55m dash performance ties the state record time of 6.26 from Damiere Byrd in 2011. That was an en route performance to his 6.74 victory in the 60m dash during the New Balance Nationals Indoor meet. He also over takes the NJ#2 all-time performances of 6.30 shared by Joe Dawkins of Hackensack, 1995, and Jamar Ervin of Camden, 2001. Damiere Byrd graduated from Timber Creek in 2011 and is currently a wide receiver for the Carolina Panthers of the NFL.

Before the finals he had advanced on a 6.32 from the semis.

Thanks to Jim Lambert for the heads up on the en route 6.26 by Damiere Byrd.