The Shore Conference Championships usually bring the heat and they did so once again on Friday night in Toms River, NJ. Meet records were broken, champions were crowned, a US#1 time was performed and more.

In the 3200 meter state champion Devin Hart of Pt Pleasant Boro wowed the crowd with his impressive 9:10.44 run to win the conference title. That time not only unseated Grant Northcutt of Virginia from the US#1 spot but also broke the meet record for a Shore Conference well known well for it's distance runners. The record broken was a 9:15.04 held by Blaise Ferro of CBA since 2014.

The 9:15 standard was on Hart's mind during the race but he was also testing his gears and how his body would react to a hard negative split. Well.. it worked out pretty well Devin. He stated in the interview he opened with a 4:40 and came back in 4:30. He also doubled back in the 800 for second running 1:59.05.

Lily Orr dropped some major time on Friday night, a 57.81 NJ#4 to break the meet record winning the Shore Conference title. The Rumson-Fair Haven sophomore's previous best was 59.00 and that was the only recorded time for her under 60 seconds.

While she stated in the interview she wasn't expecting a time like this Orr did note a back injury has ailed her through December and January. That problem has finally cleared up and she was really able open full throttle on her two lap title run.

Her time is the fastest flat track performance for the 400 meter with the three times ahead of her for New Jersey all coming from the banked tracks of Ocean Breeze or the Armory. Orr came back to anchor her team's 4x400 meter to victory, a time of 4:02.98 NJ#3 this season.

An Abundance of Strong Performances

Onto the boys side of things we'll keep it in the throwing corner where Joshua Lezin of Lakewood broke 59 feet with his 59-05 mark to win Shore Conference. He now ranks NJ#2 on the season and the next stop is 60+ city. Dan Mead of CBA also broke into the top five for the state with his NJ#4 mark of 58-02.25.

Team Victories to CBA and RBC, One Came to the 4x400m 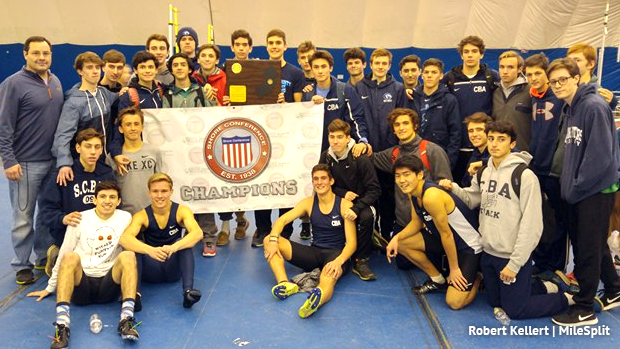 Christian Brothers Academy won their eighth straight and 23rd overall indoor Shore Conference title with 53.5 total points. They had one gold medal to open up the meet thanks to senior Andrew Canale who ran a season best of 51.37 to win the 400m. They also had four silver medal finishes thanks to Tim McInerney (4:21.13)  in the 1600m, Luke Reid (9:24.55) in the 3200m, and the 4x400m (3:31.90) relay team which Andrew Canale was on as well. For a full statistical breakdown check this team summary here. 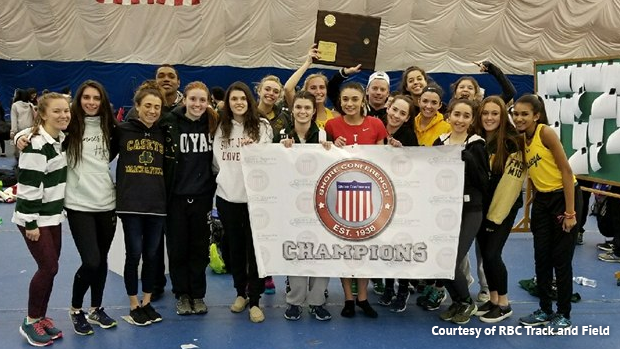 The Red Bank Catholic girls won their school's second Shore Conference title and first since 1990 with 31 points, two ahead of Southern Regional and three ahead of Rumson-Fair Haven. A tight team battle that came down to whoever gathered the right amount of points in the 4x400 meter.

The RBC 4x400m team got it done with a second place finish of 4:08.60, a hard earned run as seen in the image below. The Caseys scored in five events, placing second in three of them: Jessie Castellano 58.85 in the 400m, Julianne Kopec 2:23.40 in the 800m, and of course the 4x400m that sealed the deal. Check out their full team breakdown right here. 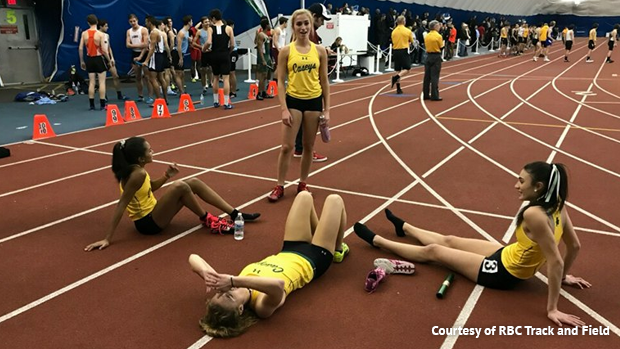