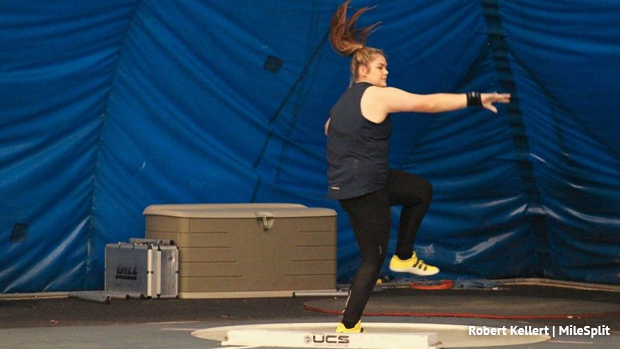 Full Results | Photos (Field is up, Track still on the way)

Two of the best returning sprinters in the state opened their seasons at the Demarest Invitational in Toms River, NJ on Saturday morning. This was the first high school meet here since the revamped track surface was put in over the summer.

Iyanla Kollock of Our Lady of Mercy won the 55 meter dash for the second straight year, this time running 7.29 in finals and 7.23 to lead prelims. She came back to run 43.07 basically alone in the 10th heat of the 300 meter dash to place third overall.

That 300 meter dash gold was won by another notable returning athlete Sydney Hawkins of Phillipsburg. The junior ran 41.19 to toast the first heat and lead the meet by .49. This was her first race at that distance.

Kollock and Hawkins are top returning sprinters for the 55 dash, they placed second and third in last year's Meet of Champions final. Both rank top ten on the Bubble facility all-time list with Kollock's 7.00 and Hawkins' 7.07 from last season.

An interesting note from the shot put circle where freshman Bryanna Wilson of Howell won throwing 35-2... A solid opener to her high school career, she is the sister of all-time great Alyssa Wilson who graduated last year from Donovan Catholic and now throws at UCLA.

In the girls 1,000 meter Taylor Mulch of Southern Regional won for the second straight year with a 3:06.02.

Some boys highlights included the shot put where Justin Zhang of East Brunswick hit a great early season mark of 49-9.25. This senior is already well ahead of where he was at this point last year.

The boys pole vault saw senior Dekker Buckley of Rumson Fair Haven vault over a 13-6 bar, an overall PR even counting outdoors. This was his first indoor high school meet.