Courteney Campbell, who won the indoor Meet of Champions title the past two years, has graduated and is studying and competing at Rutgers now. There are a number of talented girls that will be battling to take her place this winter.

One of the best that comes to mind and someone you won't find on the indoor returners list is Jenna Rogers of Rutherford. As a freshman last spring she cleared 6-00.75, a magnificent PR of over four inches, at New Balance Nationals Outdoor to win the national championship. While she skipped indoor competition last year for volleyball she'll be making her winter debut this season.

Another jumper with great credentials coming in is Montgomery junior Abrianna Barrett who won the outdoor MOCs title clearing 5-10, a height she achieved twice last spring.  That was after battling Tierra Hooker of Timber Creek, now a sophomore, who also cleared 5-10 that day for second on jumps.

Also tied with those two among indoor returners at 5-06 is Meghan O'Malley of Randolph, she got off to a really hot start last winter and won a sectional title before placing eighth at MOCs.

There are plenty more in reach of a state title and with many of the top girls only juniors and below New Jersey is set to enjoy some high flying battles for seasons to come. 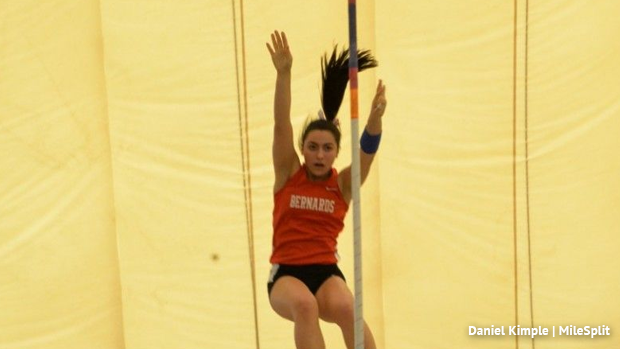 Francesca Porambo of Bernards leads the returning pole vault field from last indoor thanks to her 12-0.5 vault at the Morris County Coaches Invitational. She was fifth at MOCs that season and all four girls ahead of her have graduated. During the outdoor season she went on to clear 12-5.5.

During outdoors Melissa Purcell of Pascack Valley made a case for herself as well, she was in the epic spring Meet of Champions battle that saw four girls clear 12-06. Purcell ended up fourth on jumps but leads the state on the outdoor list. She is tied for second among indoor returners with 11-6.

Pingry's Caroline Dannenbaum is tied for second among returners with the above mentioned Purcell, and Lilly Brown of Lakeland at 11-06. The 10 of the top 12 indoor vault returners are seniors and Caroline Dannenbaum is only entering her sophomore campaign. Caroline is the now graduated Julia Dannenbaum's sister, Julia was a state champion vaulter we often saw toward the top of the leaderboards.

It should be noted that Haley Horvath of Notre Dame also cleared 12-0 during the spring at that high flying Meet of Champions. Only a handful of girls have done so that will be competing this winter.

There are tough shoes to fill in this event with all-time great and national record holder Alyssa Wilson off to UCLA. Luckily girls throwing in New Jersey has been so deep the past few years we still have plenty of exciting talent stepping up to the plate.

The longest returning throw from last winter belongs to Najeaya Singleton of Vineland. The senior threw 46-1.5 to win the Group 4 state title and finished 6th at the Meet of Champions. She and Shelby Bigsby, ranked second among returners, are the only two girls with throws over 44 feet. Bigsby, a senior at Montclair, was third at the Meet of Champions and won the Emerging Elite Shot Put at New Balance Nationals Indoor. She also leads all outdoor returners with a 45-9 and placed third at the spring MOCs as well.

Zyra Thomas of AP Schalick was fourth at last year's indoor Meet of Champions and ranks fourth among returning throws with a mark of 42-8.5. Just ahead of her in third on the returners list is Tiaunna Macon of Red Bank Regional with 43-0, she was 5th at MOCs.

It'll be fun to see these girls mentioned and plenty of other talented returners battle it out to become the new #1.