Devin Hart was dealing with both prior to Saturday's NJSIAA Meet of Champions race at Holmdel Park. But as soon as the gun went off, the junior at Point Pleasant Boro shook off those feelings and did what he's done all season.

After a 5:10 first mile and 5:07 second mile, Hart made a huge push from the two-mile mark to the tennis courts to open up a six second gap on Chris Romero of Voorhees, and then hammered his way down the hills in the back woods on his way to victory in 15:35 at the 46th annual race.

Ever since he won the 3,200 at the outdoor Meet of Champions last spring, Hart has been the overwhelming favorite to win the XC M of C title. So he knew there would be a big target on his back on Saturday.

"I was feeling a lot of pressure and I started to get pretty nervous about 30 minutes before the race, which typically doesn't happen,'' said Hart, the top returning finisher from last year when he was 8th. "But once the race started I let my instincts kick in and I just ran the race that was laid out for me.'' 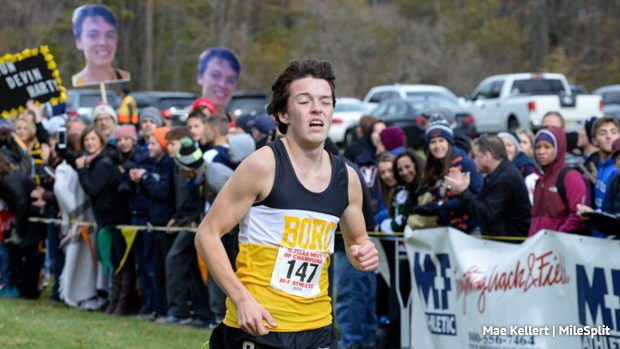 Hart, who executed his race plan perfectly, was with Will Hare of Princeton, Damien Dilcher of Brick and Romero at the mile mark. Then coming out of the bowl, Romero and Dilcher were right on Hart's heels. But at the 2-mile mark, it became a two-man race between Hart and Romero, just like last week at the state Group 2 race that Hart won in 15:34, seven seconds ahead of Romero.

Hart joined Eamon Blanchard of Lacey, who won in 1994, as the only Ocean County boys to ever win a M of C XC title, and he's the fourth boy from the Shore Conference to win the M of C title in the past six years.

"It feels great to see all the hard work I put in pay off with my first Meet of Champions title in cross-country,'' said Hart. "As I was coming down the final stretch, I was thinking about all those long runs on hot and cold days, and all the workouts that led up to this moment. This is something I've wanted since my freshman year, so it feels great to accomplish this.''