A year after seeing its six-year M of C winning streak end when it placed third (five points behind surprise winner Princeton), US #7 CBA took care of some unfinished business by regaining its title with a hard-fought 80-96 victory over a very strong Kingsway pack. Hopewell Valley, the state Group 3 runner-up, ran a great race to get third with 111.

The victory extended CBA's state record to a remarkable 22 M of C titles, 18 more than any other program (Paul VI has four), and is the first title for second-year CBA head coach Sean McCafferty, who made some state history with the win. McCafferty and his father, Al, are the first father-son coaching combination to ever win XC Meet of Champions titles. Al McCafferty was the head coach for St. Joseph of Metuchen when it captured the first ever M of C team title in 1973.

CBA, which came into the race as Co-NJ #1 with Kingsway, was determined to get back its title.

"We remember what it felt like last year when we lost and there's no way we were going to leave here with that feeling again,'' said CBA senior Brian Hill, 7th in 15:58  "We came here to take care of business and we did what we had to do.''

Hill also said seeing his team ranked No. 2 in the Northeast behind Kingsway by another website got CBA jacked up.

"When we saw that we were dropped to No. 2 in the rankings, we couldn't believe it,'' said Hill. "That really got us fired up. We came out here with something to prove today.'' 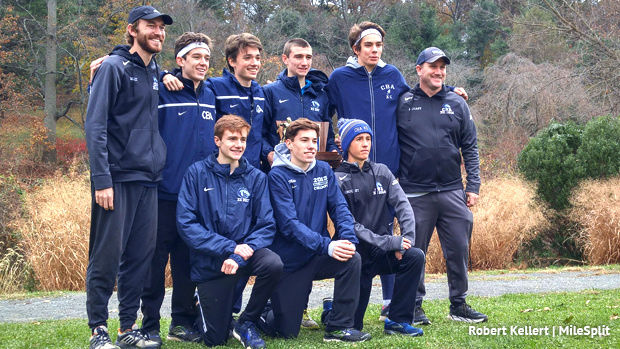 The race didn't play out the way many had predicted due to a fast early pace that caused CBA and Kingsway and several others teams to become much more spread out than usual.

"Our 4-5 guys got too spread out at the start and we just couldn't recover enough to catch CBA,'' said Kingsway coach Christian Lynch. "We know we can run better and we'll use this as motivation for next week at the Nike Regional. I expect we'll be hungry to race CBA again next week, and hopefully we can run the way we are capable of.''

McCafferty, a college teammate of Lynch's at Princeton, said his pack had a lot of work to do in the last mile to secure the title.

"The race went out way too fast fast and we got spread out,'' said McCafferty. "And I wouldn't be surprised if we were losing at the tennis court. Hill did a great job staying up near the front the whole race, and our two through five guys (Luke Reid, Tim McInerney, Ryan Miele and John Sheridan) really came in hard and closed well. We didn't run our best race, but the guys got the job done and pulled through. Last year was tough. Leaving this place last year knowing we were the better team hurt. So this year we really wanted to win this race, and I'm proud of the guys for finishing as strong as they did to win this.''

CBA will clash with Kingsway again next week when the Colts defend its Nike Northeast Regional title next Saturday at Bowdoin Park in Wappingers Falls, N.Y. The top two teams in the race automatically qualify for the Nike Nationals in Portland, Oregon on Dec. 2.  CBA placed 7th at Nike Nationals last year.