South Jersey action at Delsea on Saturday brought the usual excitement as we saw different streaks end and continue. There was also some after race drama in the boys Group 4 when an initial missed call on a DQ required sportsmanship to prevail and rectify the issue.

The Group 4 boys race was won by Justin Kelly of Cherokee with a time of 15:46 followed by three Kingsway boys led by Joe Grandizio at 15:50. After the race finished there was a call in by an official on the course for a DQ on Cherokee's leading runner for cutting the course, much to the surprise of Cherokee and Kelly who had raced this course plenty of times previously. Luckily after there was some confusion on if the call was accurately attributed sportsmanship prevailed.

The DQ was left to miss-identification when Kingsway's top finishers went to meet management to help resolve the mixup. Joe Grandizio and company explained that Kelly never cut the course as they were racing with him the entire competition, Kelly's first career sectional title was reinstated promptly after that.

Two time defending Meet of Champions winner Alyssa Aldridge has fought her way back into contention for a third title after missing much of her season and training to a summer injury. On Saturday the Mainland Regional star won her third straight South Group 3 title with a time of 18:13. Jade Tricomy of Toms River South with the fourth fastest time of the meet behind her in second at 18:30.

In that same race a team battle between Ocean City and Seneca was hard fought with Ocean City the victors, led by Alexa Weber at 18:49, 35 to 47.

In the girls Group 4 NJ#2 Kingsway and Shawnee had a close fought race which saw Kingsway finishing seven points ahead of Shawnee 42 to 49. This was Kingsway's third straight win and eighth all-time Sophomore Isabella Turner won the race and collected the one card for Shawnee running 18:22, a full 23 seconds ahead of second place Lauren Krott who opened the scoring for Kingsway.

Turner is the fifth girl from Shawnee to win a cross country Sectional title in school history and the first since 2014, she had the second fastest time of the South Sectionals combined only behind defending MOCs winner Alyssa Aldridge. 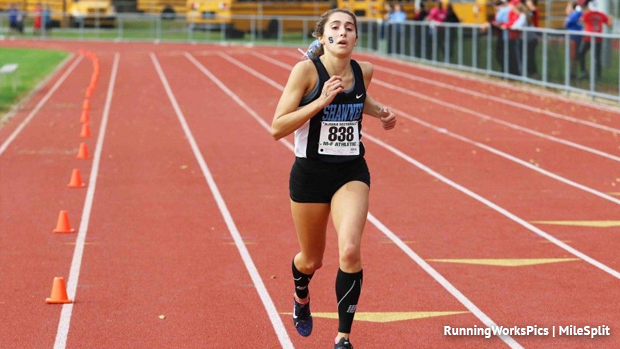 Haddonfield swept the boys and girls South Jersey Group 2 team titles. The boys won their 14th straight sectional and 35th all-time. Martin Riddell and Greg Eisenhower finished first and second for Haddonfield at 15:49 and 15:58. Despite one of their top athletes, Derek Gess, having to drop out mid-race they still scored 23 points (1+2+3+8+9) and split 42 seconds between their top five.

The girls team won their eighth straight and 25th all-time. With three freshmen in their scoring five and two leading the team with Allison Colflesh and Payton Weiner in third and fourth they scored 27 points averaging 19:58.

The Group 2 individual winner went to a non-Haddonfield runner for the first time since 2001 when Sterling's Madison Coppolino crossed the line at 18:29. This was her school's first Sectional winner since 1985 when Mindy Rowland won her third straight.

In the Group 3 boys race Ben Woodward of Highland Regional and Colin Kane of Delsea gave the crowd a show as they battled to the line for the individual title. Woodward got the win at the line at 15:52.

While Kane had to settle for second individually he had a pretty good consolation prize waiting for him in the team scores as Delsea won a close one with Mainland Regional 65 to 68 for their second straight and fourth Sectional title in school history. Kane's low card played a key role in battling Mainland Regional's strong pack running, Mainland split a mere 35 seconds between their scoring five.

For Group 1 two sophomores won the individual titles. Pitman's Sebastien Reed led the boys race with a 16:11 and  AP Schalick's Marleigh Puglia the girls at 20:01. The Haddon Heights and Haddon Twp boys when back and fourth in the team scoring before the dust settled and Heights earned the win 54 to 61. Pitman girls won their eighth Sectional scoring 40 points.