Interview with Malual Mu after his indoor 1600m win at the Meet of Champions.

Q. How has your summer training gone?

Mid to late August we'll start up with a one or two mile time trial. Last year [with an injury] was very different than this year so we had to take everything careful. During the season I would run four miles in the morning and then go to practice and that was different every day. My workout days would end up being seven or eight mile days.

Q. How does having a healthy summer this year change your approach to how you race?

Every race is going to be all out for me I want to lower my PRs a lot because most of them are from sophomore year. I'm really excited to finally see what I can do in cross country.

Q. Which races are you looking forward too?

Briarwood and hopefully the Cherokee Challenge. All of the Thompson Park meets are nice.

Q. Are you looking to race anyone this season? 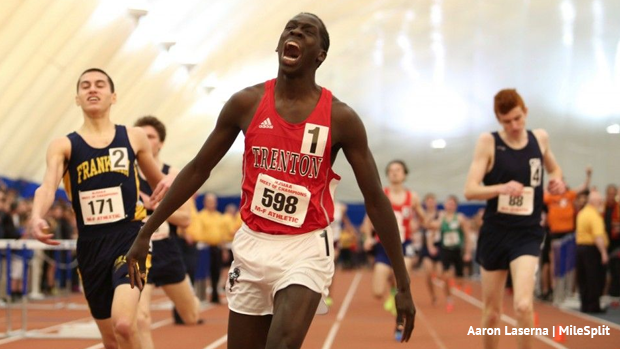 Q. What happened with your injury last year?

My sophomore year at outdoor sectionals I won the 1600m in 4:19 then I came back and got second in the 4x800m. The next day I had to come back and run the 3200m and that is when I got hurt, I was already hurting but still ran. After that my whole summer was just resting it. I ran cross country a little but it didn't go so well. I didn't take a break after that season so I started doing morning runs and training super hard for track and I think that's why I had such a good season because of how long I was working really paid off indoors. While everyone was running Groups, MOCs, and NXN I was training. I was training for a long time and it carried me all the way through outdoors.

Q. What did it mean to you to have that work pay off in such a big way?

Coming off an injury, and racing these guys that were faster than me the year before and in cross country and beating them and winning MOCs was unmatched. It showed how much all my morning runs and training paid off.