The greatest career in high school track and field history has come to a close. The Olympian Sydney McLaughlin, a two-time Gatorade National Athlete of the Year honoree, has completed her last high school event, graduated from Union Catholic Regional High, and is on her way to the University of Kentucky -- and beyond -- to continue doing great things.

And it comes one year after her semifinal appearance in the 400m hurdles at the Rio Olympics. At the age 17.

She has already accomplished so much during her young career. As stated in a reflective tweet she posted on Twitter months ago: She was an 2016 Olympian, an 11-time Meet of Champions winner, posted 23 school records, set five national records, earned 12 national titles, and was a world junior record holder in the 400m hurdles.

This article will take us through a timeline of some of her best performances, turning points and more, mixing in race footage and interviews.

The Start of Something Special 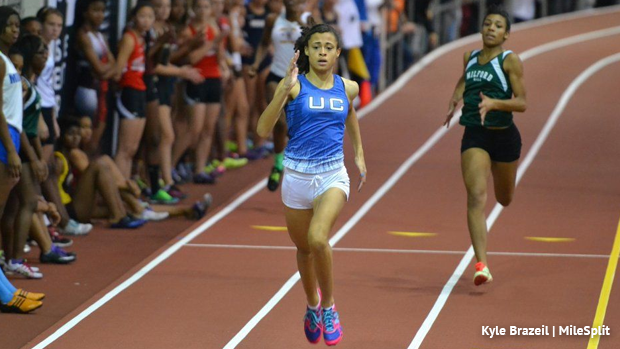 Off to a Record Breaking Start...

How else would this story begin other than with a record breaking performance? Sydney McLaughlin's high school career debuted on December 21, 2013, with a 38.55 second state record victory in the 300m dash at the Bishop Loughlin Games. Three years later, her current 300m PR is the indoor high school national record of 36.82.

Skip forward through some impressive first year items, such as Union County titles and a long jump mark of 18 feet, 2.5 inches. McLaughlin's first experience at the state championships went very well, as she won the NJSIAA Non-Public A titles in the 55m hurdles and 400m dash, moving on to the next round well seeded for a freshman.

McLaughlin finished third in the 400m, running 56.15 at the 2014 NJSIAA Indoor Meet of Champions. This is the only time she would leave the meet without a gold medal. Columbia High's Olivia Baker, another New Jersey great, won the event that year with what was then a meet record time of 54.09. McLaughlin mentioned three years later in an interview that when she started out, she looked up to athletes like Baker.

If McLaughlin didn't have the nation's eye yet, she made some noise at New Balance Nationals Indoor. The Union Catholic star posted the 11th fastest 60m hurdles time of the meet at 8.62 seconds, a freshmen state record. The next fastest freshman at that event ran 9.10. 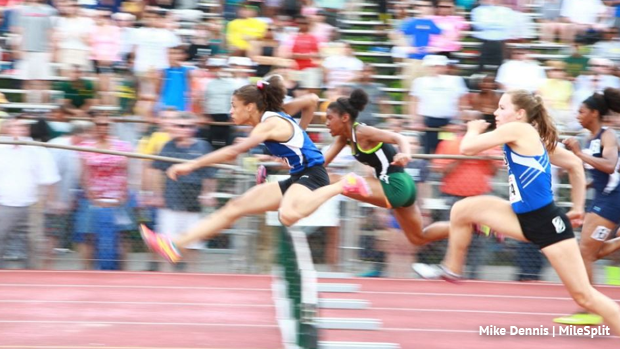 No Looking  Back Outdoors...
Despite five varsity wins and a sectional title in the long jump alone, that isn't the story of her first outdoor season. This is when Sydney McLaughlin really started to take off on the track.

On May 1, 2014, an important streak began: She ran her first 400m hurdle race with a winning time of 1:00.54. From then on, she would finish out her prep career undefeated against high school competition.

During her outdoor state championship meets, McLaughlin won every event she competed in. Four titles at the Sectional level, three at Groups, and two at the Meet of Champions. Her two MOC titles came in the 100m hurdles and 400m hurdles at 13.47 and 56.91 seconds, respectively.

With national and international competition quickly becoming her only chance at formidable adversaries, the freshman phenom found out that her seasons would be far from over at the state level. During New Balance Nationals Outdoor in 2014, she won her first title in the 400m hurdles with a time of 56.89 seconds and forged an agonizingly close second-place bid in the 100m hurdles to Alexis Duncan, 13.34 to 13.33. Not only that, but she anchored a 52.04 second 400m on the 2:09.95 winning Swedish SMR team for Union Catholic.

McLaughlin then tested the system during USATF Junior Nationals when, at just 14 years old, she placed second in the 400m hurdles, running a state record time of 55.63 seconds. Due to her age, even though she qualified on place, she was too young to head to the World Youth Championships. She was second to a talented Shamier Little, who ran 55.43 and was already attending Texas A&M.

Interview with Sydney McLaughlin after her 2nd place finish at USATF JR Nationals.