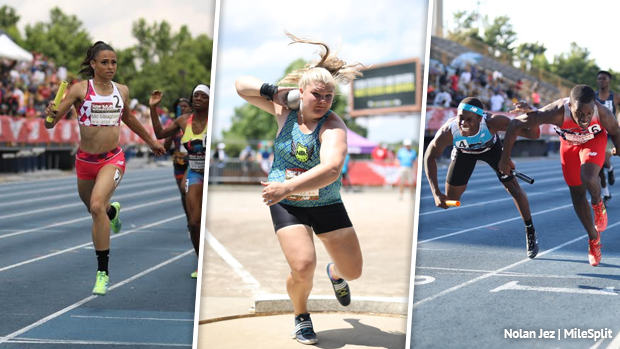 Plenty to celebrate about thanks to some talented New Jersey athletes competing at New Balance Nationals Outdoor this past weekend. Below we recap the national champs New Jersey produced at NBNO as well as a link to the full New Jersey meet leaderboards. An article featuring all the New Jersey All-Americans will be out soon as well featuring plenty of other great New Jersey performances from this meet!

Here are some New Jersey focused meet leaderboards from this year's NBNO. While the below recap will focus on our champions, these leaderboards will give you a look at the great number of top finishers out state produced.

Some quick notes about each of our champions. 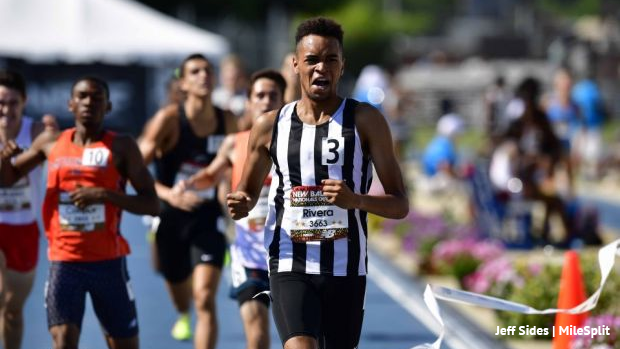 Rey Rivera wins his first NBNO 800 meter title with a run of 1:50.47 this weekend, closing out his second straight undefeated outdoor season in the event. Rivera was oh so close this past indoor season at NBNI finishing second with a 1:50.04.

Rivera moved up to sixth all-time in New Jersey this spring with his 1:49.59 performance at Group Championships. A tough thing to do in a state with a storied mid-distance history. You can watch that race here.

The East Orange boys earned a double win in the 4x400 meter and shuttle hurdle relay, reminiscent of their 2017 indoor showing when they did the same at NBNI.

Their 4x400 meter victory came in dramatic fashion as they and Miami Northwestern dove through the line, East Orange emerged victorious with a time of 3:11.69 to Miami's 3:11.71. East Orange's shuttle hurdle victory was more dominant with their 56.58 run, breaking the New Jersey state record of 56.63 set by Union Catholic at this very meet in 2013.

Cory Poole, who also placed second in the 400 meter hurdles at 50.82, and Akeem Lindo were on both winning squads. Juniors Al-Tariq Dunson and Ibrahim Fobay were on the shuttle hurdle team and Kishaun Richardson and Immyouri Etienne finished out their 4x400 squad.

The Union Catholic girls set a national record in the 1000m Swedish relay when they ran 2:05.93. Sydney McLaughlin closed the relay with a wild 49.85 anchor split! The previous meet standard was also held by Union Catholic when they won in 2016 with a time of 2:07.99. Also on this record setting relay: freshman Sydney Tucker, junior Amaya Chadwick, and sophomore Khamil Evans.

Alyssa Wilson won two championships and placed second in a third event this past weekend at NBNO. The star thrower struck gold for the second straight year in the shot put with a mark of 54-10.75, in the discus her victory came on the meet record launch of 179-07. If two championships at this high level meet weren't impressive enough she close to a third! In the hammer throw Wilson finished second overall with a mark of 180-0.

Jillian Shippee of Clifton Park (NY) won the hammer event with a 192-10 performance.

State record! The Rutherford freshman Jenna Rogers jumped right into state and national history with a HUGE personal record of 6-00.75. Her best going in was 5-08, an already impressive height for an athlete her age but she improved it by over four inches.

Her performance broke the national freshman record and the New Jersey state record. The state record was previously held by Tatiana Smolin of Randolph, who cleared 5-11 in 1983. Smolin also held the overall record with her indoor height of 6-0 in 1985.

Her jump of 6-00.75  bested Vashti Cunningham's freshman national record of 6-00.25 from 2013, Cunningham went on to compete in the 2016 Olympic Games. Big things ahead for this young talent!

More to come! With a complete New Jersey All-American list.