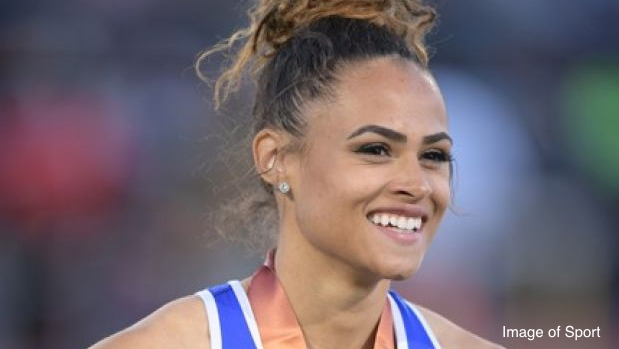 U.S. Olympian Sydney McLaughlin added to her legendary status as arguably the greatest high school female track and field athlete in U.S. history with another scintillating performance at Saturday's NJSIAA Non-Public A Championships.

With the crowd at Silver Eagle Stadium in Egg Harbor on its feet as she came hammering down the final straight, McLaughlin delivered a sizzling victory in the 200 by stopping the clock at 22.96, which broke the New Jersey state record of 22.99 set in 1983 by Wendy Vereen of Trenton, and sent the fans into a frenzy. It's also the fastest legal time in the U.S. this season.

McLaughlin's victory in the 200 was her third All Groups meet record at the two-day meet, and capped off the fastest triple in state history and one of the fastest ever in the world.

On Friday, the 17 year-old McLaughlin broke her own World Junior and U.S. high school record in the 400 hurdles with a 54.03, the third fastest time in the world this year, and won the 400 in 51.88, the fastest time in the nation this season and just off her state record of 51.87 that she ran at the Meet of Champions last year. McLaughlin's combined time of 105.91 placed her fourth on the all-time world list for the one-day 400 hurdles/400 double, according to Jon Mulkeen of the IAAF.

McLaughlin's triple may have put to rest any debate about whether she's the greastest female track and field athlete in U.S. high school history.