In the video above is Jordan West's shot put series, he clinches second place on the last attempt, the full field of throws can be located at the bottom of the article.

New Jersey State Champion Jordan West of Rahway opened his season in impressive form over the weekend in South Carolina during the Bojangles Track & Field Classic. He earned second place in both the shot put and discus throwing state leading marks of 63-9 US#13 and 181-0. He was second only to Jordan Geist of Pennsylvania who has been moving up national all-time lists lately. Geist won both events throwing 74-10.25 US#2 and 189-04.

West already has outdoor personal records of 65-1.25 and 190-2 in the shot put and discus, but what stands out about these marks is how early they have come.  Last year West didn't break 63 feet in the shot put until late April and he did so twice during this opening meet with an entire series over 60 feet. In the discus West wasn't reaching the 180s until May, his opening meet in 2016 produced a mark 165-0. Not only that but his second place finishes came out of a very talented pool of athletes, check the results below.

Results from the Shot Put and Discus 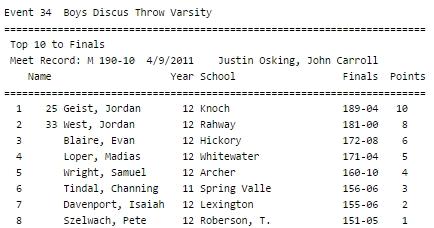 Check out this sweet trophy.

If you would like to view the entire Shot Put Final series with all the athletes in this talented field you can watch that below. This includes Jordan Geist's monster 74-10.25 winning throw.