Tuesday afternoon the Christian Brothers Academy cross country team set out to defend their national record streak of 343 dual meet wins. They accomplished that task by defeating Colts Neck and Manalapan with scores of 27 to 32 and 15 to 50 bringing their streak to 345. This continues a tradition that has been running since 1974! Watch the race video above.

The score of 27 against Colts Neck totaled as such: 2+4+6+7+8 (9+10). Brian Hill lead the way for the Christian Brothers placing second with a time of 14:28. After going back and forth with Colts Neck through the sixth position it was all blue singlets from there on sealing the win for CBA.

Colts Neck distance star Jordan Brannan took the one card running 14:22 breaking the course record, a distance just under three miles long. Brannan wasn't the only one running quick today, the top four finishers all would have broken or tied the record as well set back in 1999 at 14:38 by Brian Kerwin.

For a deeper look at the history of the streak check out Jim Lambert's article recapping it through the years via NJ Advanced Media. 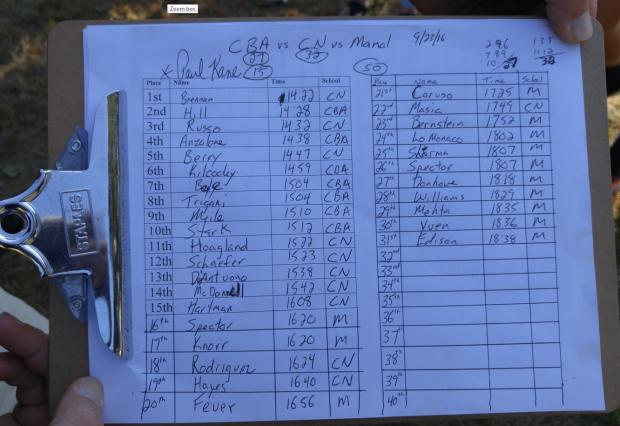 I'll let this video tell you who won. The streak stands! @milesplit pic.twitter.com/O6jMxgm7ik