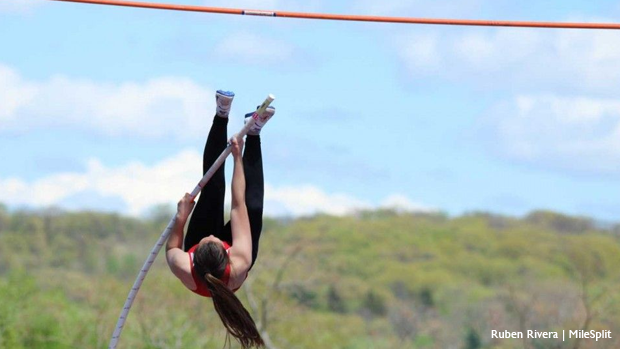 This past Sunday on May 8th the third annual Andy Washnik Memorial Pole Vault meet took pace. Unfortunately weather was not agreeable leading to a two hour delay and eventual shutdown of the meet before some of the top vaulters even had a chance to get over the bar. Meet Director Robert Pasek stated the decision to call the meet was due to the "Mahwah wind" picking up and creating a dangerous environment for vaulting.

However some vaulters did get to compete before the meet was ended, including Fair Lawn's junior Jessica Ippolito who cleared a 12-0 bar to win the shortened competition. Despite the poor conditions her vault is a meet record and NJ#3 so far this season. The previous record was held by Lauren Bilali of Northern Valley Old Tappan in 2015.

Placing second at this meet Francesca Porambo of Bernards would have also cleared the meet record finishing with a height of 11-2. She already ranks NJ#5 with a clearance of 11-6 at the Skyland Conference Relays.

The girls pole vault is a state event built for the future so far this season wit the top seven vaulters in the state belonging to the junior class or below.

The boys vault at this meet was won by Brian Rubenstein of Governor Livingston at 12-02. Jason Mezhibovsky of Demarest and Devin Kusmider of East Brunswick also clearing 12-02 for second and third. Rubenstein is currently ranked NJ#3 in the state with a vault of 14-0 back on April 30th at the Millburn Relays.

About Andy Washnik, the man the meet dedicated to.

This section was provided by the meet on the meet page...

Andy Washnik was an invaluable volunteer coach for the Park Ridge Spring Track and Field Team. His love for the sport and event radiated from his smile every day of his life, and it was his love for Track and Field that helped Andy battle cancer so valiantly. A graduate of Northern Valley Old Tappan, Andy was a decorated sprinter and jumper. But his true love was pole vault. It gave Andy great pleasure to coach the pole vault, not just for his 'Ridgers' but also for all athletes involved in the event. Sadly, Andy lost his battle with cancer, but his love for the sport continues to shine on in the eyes of his athletes and fellow coaches. The Andy Washnik Pole Vault Festival is in Andy's memory and is based on his love of vaulting and passing that love on to others.