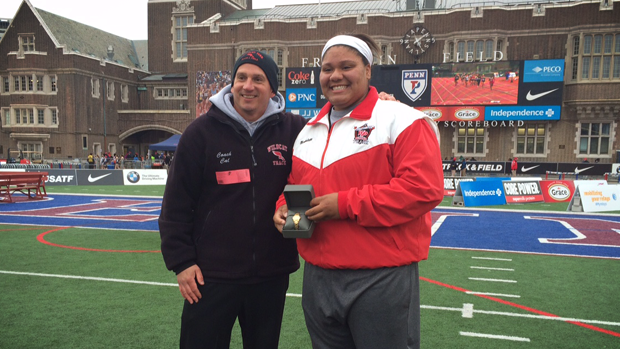 Nickolette Dunbar after winning the shot put at the Penn Relays.

If you weren't following the girls shot put performances during both indoor and outdoor this year you missed out. This spring we saw a state record by Nickolette Dunbar at the Meet of Champions and four girls over 45 feet! During indoor we had three girls over 48 feet and some of the best throwing we've seen since 1991's Nicole Sims who still holds the indoor state record at 49-9.5!

To give some perspective, using performances from the NJ MileSplit database I went back to 2008 and recorded the top six rankings for each year to compare. All the green marks were out performed by this year's athlete, so the NJ#2 from 2012 was bested by the NJ#2 mark from 2015 for example. If you take a look at the tables below you'll see that the 2015 field totally out shined the last 7 years at the least.

This past outdoor NJ had three girls in the US top 50 with Nickolette Dunbar US#3, Alyssa Wilson US#5, and Jessica Molina US#27. Indoor we had an even higher presence with seven girls in the top 50! Nickolette Dunbar US#4, Jessica Molina US#5, Alyssa Wilson US#7, Amarys Berry US#19, Ronetta Hunter US#30, Nikolia Kanaris US#40, and Michelle Mazza US#48. The only other state to have as many top 50 indoor shot put marks was New York who also had seven athletes.

Even better, if you take a look at the grade level for the 2015 NJ#1-6 athletes we see five girls returning for each season's list. Graduating is Ronetta Hunter of Burlington Twp who will be continuing her education and athletic career at Rider University this fall. Next year's competition between these athletes should be fun to follow all season long with another year of training and experience to perform with. Especially at the very top with the three standouts who threw over 48 feet during indoor.

The current undisputed number one Nickolette Dunbar just finished 6th overall at the IAAF Word Youth Championships and set the outdoor state record in the event while winning the NJSIAA Meet of Champions at 51-2.75. Alyssa Wilson while only a sophomore is also a state champion has been pushing personal bests and records not only in the shot put (PR 49-10.5) but in the discus (PR 153-4) and hammer (170-3) as well. Last but not least Jessica Molina of Westwood who also has a state championship and was 2nd in the shot this past indoor MOCs will look to compete for that number one spot as well as she finishes her high school career.

Needless to say it will be very exciting to see how far this group can go in the future. 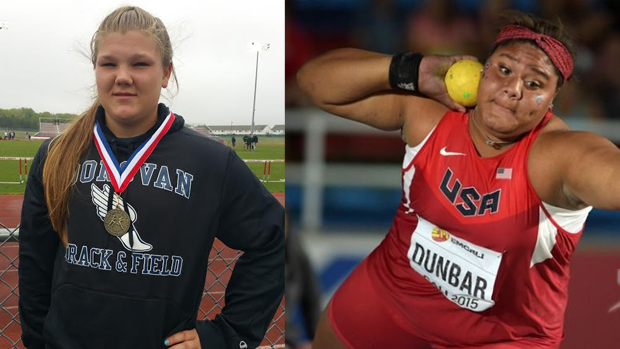 Alyssa Wilson of Donovan Catholic on the left, Nickolette Dunbar of Whippany Park on the right.