Boys highlights from the Manhattan Invitational. If you would like a New Jersey only merge check out this article! 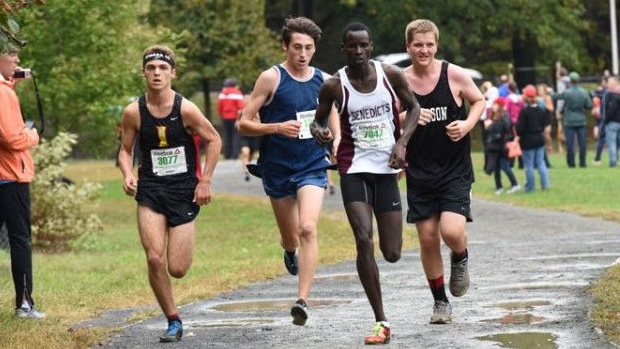 Blaise Ferro (blue singlet) and Edwin Rutto (white singlet) coming down with about 500 meters to go. / Photo by Steve Pisano

This was it, the showdown many around New Jersey and the country had been waiting for. We had a heavy talented field in terms of teams and individuals, not only between New Jersey elites but on the national rankings scale as well. Edwin Rutto of St. Benedict's Prep and Blaise Ferro of Christian Brothers Academy faced off on the Van Cortlandt 2.5 mile course and Rutto won this decision with a big kick the last 600 meters. Rutto made the move to pass Ferro just after 600 meters to go, right where I was taking photographs. Rutto would finish in third with a time of 12:15 while Blaise Ferro would take fifth with a 12:21. Both juniors had great races as Ferro improved his 2013 time by almost 15 seconds while Edwin Rutto hit a course best by around 55 seconds! When comparing fellow NJ times on Saturday they posted the two best performances of the meet.

Some other great individual performances from this section were posted by Aaron Groff of Cherry Hill East and Craig Corti of Wallkill Valley. Aaron Groff placed 11th in the Eastern States race with a time of 12:29. Craig Corti right there in 15th with 12:32. They would have the third and fourth best New Jersey performances of the meet. 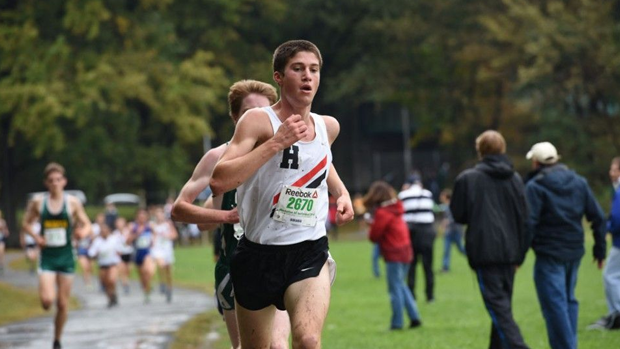 Austin Stoner of Haddonfield thunders it home with just over 400 meters to go! / Photo by Steve Pisano

The Haddonfield boys continue to impress in 2014. Individually Haddonfield and NJ were led in the Varsity A race by Austin Stoner in second place with a time of 12:54.  He improved his course best run in 2013 by almost 16 seconds and it was the eighth best Jersey performances of the meet.  We had many great individual performances in the top 15 here. Samuel Layding of North Hunterdon finished fourth with a 13:00, Matt Grossman of Millburn sixth with 13:04, Chad Evans of Haddonfield 9th with 13:07, Dan Brennan of Haddonfield in 13th with 13:16, Chris Stone 14th 13:18, and Colin Gallagher 15th 13:20.

On the team side Haddonfield won the race with a dazzling 46 points and a team average of 13:08, the second best Jersey team performance only seven seconds behind CBA! All five of Haddonfield's scoring runners were in the top 15. 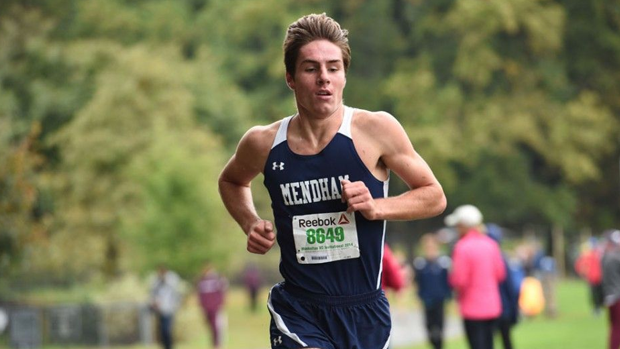 Paul Ehmann of Mendham took second in Varsity B on Saturday. / Photo by Steve Pisano

Paul Ehmann of Mendham continues to roll! He placed second for New Jersey in this race at 12:49, only three seconds off Michael Grady first place 12:46 performance for East Meadow. That was a course best for him by 13 seconds! Also in the top 15 for Jersey was Jordan Earlywine of Delbarton who ran 13:14, he just had a victory at Shore Coaches as well. Elliot Gindi of Ocean Twp in eighth with 13:17, and Joey Defeo of Delbarton in 14th with 13:26. 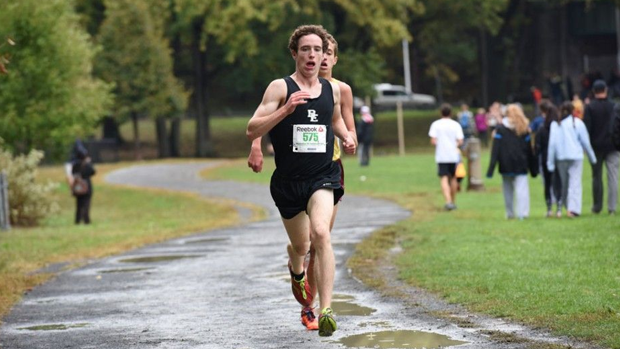 We have a Jersey winner in this race! Shawn Hutchison of Biship Eustace ran a 12:35 to win! The fifth best Jersey time from the meet. Right behind him was Leland Jones of Summit in second with a 12:36 and the sixth best Jersey time. Also in the top 15 for the Garden State: Mitchell Booth of Summit seventh13:17, Zack Csipkay of Colts Neck 11th 13:22, and Jordan Brannen of Colts Neck 14th 13:25.

We performed very well on the team side with the NJ#8 Summit Boys winning with 98 points and a team average of 13:28. They had the fifth best Jersey team performance according to the merge. The Colts Neck boys took third as a team with 128 points and an average of 13:40. Seventh as a team in the NJ merge. 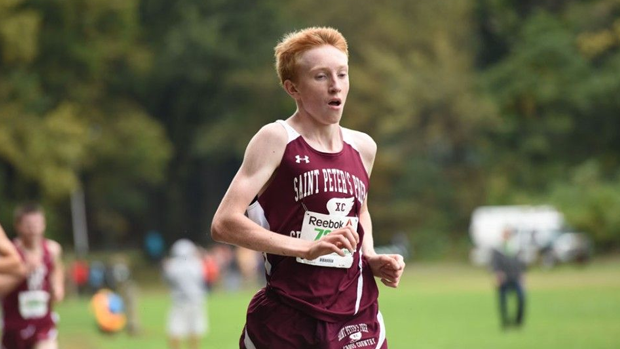 Will Delaney of St. Peter'ss Prep with a huge kick to finish the race. / Photo by Steve Pisano

Jersey was led by Will Delaney of St. Peters Prep in the Varsity D race. Will placed 13th with a time of 13:28, right behind him was teammate Brandon Parrado in 15th with 13:31.

The St. Peters boys of Jersey City placed sixth as a team scoring 163 points and posting a team average of 13:58. 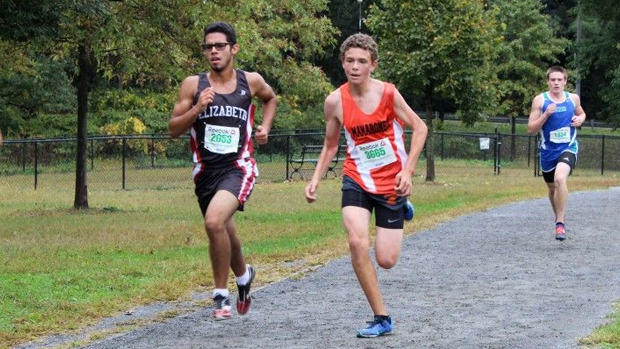 The leader in this race for us was Patrick Castro of Elizabeth HS. He finished 19th with a time of 13:55. As a team Elizabeth would finish seventh with an average time of 14:20 and 214 points. 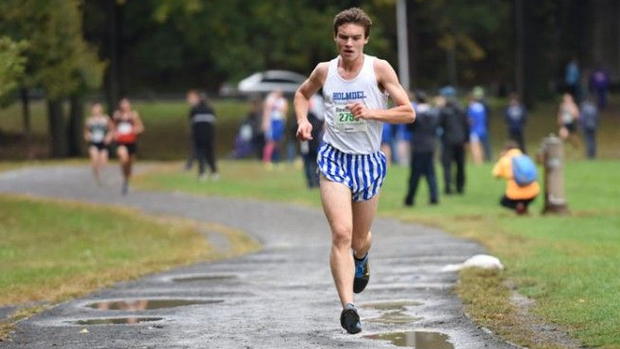 A solid amount of top performances here. Aaron Barlev of Holmdel nabs a third place finish with a time of 12:54, ranking him ninth among Jersey athletes at the meet. Senior Mike Marano of Middletown North took fourth with a personal course best at 13:09. Also in the top 15 were Adam Herskovits of Wayne Valley in sixth at 13:23 and Nick DeMaio of Holmdel in 10th at 13:28.

On the team side the Middletown North squad didn't put Marano's awesome finish to waste as they scored second as a team with 121 points and an average of 13:49. That team performance would rank 10th among Jersey teams in the merge. 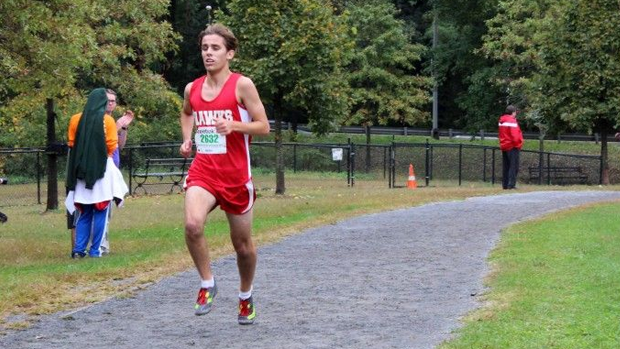 Owen Long on the final stretch. / Photo by Robert Kellert

Those high places would lead Highland Regional to a team title with 78 points and an average of 13:33. Jason Leonardo rounded out their top 5 with a 39th place finish at 14:05.

Check out the Merged Results!