The people have spoken! Thank you to everyone for voting, in the end 2,268 total votes were submitted! So let us all take a look at the readers' choices as well as some of the NJ MileSplit staff's choices who were on location that day. 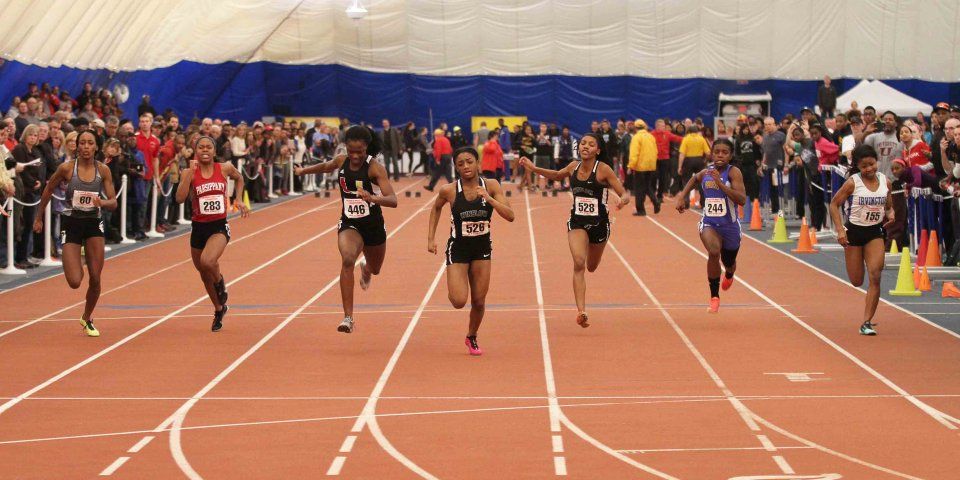 Torie Robinson winning the 55m dash finals at the 2014 indoor Meet of Champions. / Photo by SJPixShooter for MileSplit

Torie Robinson of Winslow Twp gathered 39.9% of the total girl votes to win the poll! More importantly on Saturday she won the Meet of Champions 55m Dash with a blazing 6.95 time in the finals! That ties the US#2 time and improves her NJ#1 spot. This was also a fantastic personal best for Torie who came oh so close to breaking the 7.00 barrier last week at Eastern States Championships. She took first in that prestigious meet as well. If you haven't heard yet this talented New Jersey sprints star will be attending Clemson University next fall and we wish her the best of luck at Nationals in the coming weeks!

Robert Kellert - Managing Editor - First off the US#1 meet record in the 400m by Olivia Baker was an amazing sight. It's not every day you can watch a 54.09 posted like that at the Toms River bubble. With so many amazing top US performance such as Torie Robinson's sub 7.00 55m dash victory it is very hard to choose. But if I have to pick a favorite race I'd have to go with the 2:10.52 US#4 NJ#1 time in the 800m ran by Corinne Myers of Westwood. (Plus she is US#3 depending on if you count professional runner Mary Cain as a high school athlete or not). Her aggressive race strategy paid off and no one had a chance at catching her. She was also ridiculously close to breaking the great Ajee Wilson's meet record of 2:10.45.

Pat Montferrat - Photographer / Past Managing Editor - The definition of a leader is one who makes those around them better. While any team coached by Lisa Morgan is more than likely terrific, a team with Olivia Baker on it becomes just that much better. Olivia's individual marks speak, nay, shout for themselves, what she brings to a relay is something very special. Columbia's win in the 4x400m Relay with Olivia running, not anchor, but the 3rd leg, said it all about what great performance is all about.

Aaron Laserna - Photographer - Corinne Myers aggressively controlled the race right off the line, separating herself very early from the rest of the field. Building her lead lap after lap hammering the pace, the gap was far too great for even Olivia Baker (who previously came off of the 400m) and the rest of the chase pack to challenge her as she drove home a dominant win just barely missing Ajee Wilson's MOC Record by .07. It is always great to see a gutsy race; one where the athlete attacks from the gun, as opposed to the tactical, sit and kick strategy we often see in loaded championship races. Congratulations to Corrine Myers! 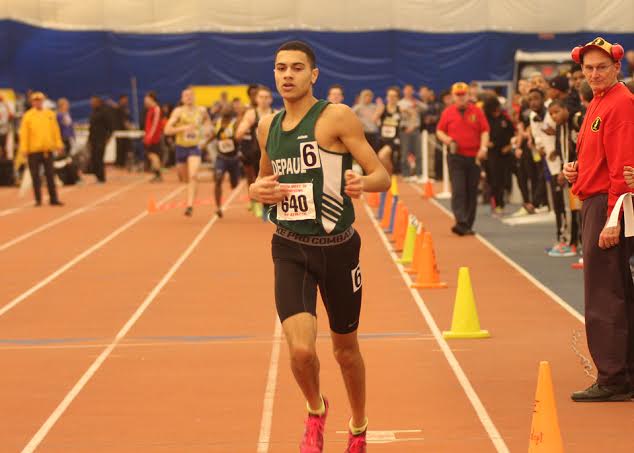 Joe White wins the MOCs 800m out of the slowest heat on Saturday! / Photo by Pat Montferrat for MileSplit

Joe White of Depaul Catholic won the readers' poll by taking in 44% of the votes. He took the lead back late last night after Ian Kirk of Howell went from last in the poll to first gaining hundreds of votes in an hour! Joe White won the Meet of Champions in an alternate route fashion. He won the Non-Public B 800m at Groups with a time of 2:01.14, a winning time but not a time that will place you in the seeded heat at Meet of Champions. That wasn't anything off Joe's back however, even while he was placed in the slowest heat out of the three ran at the Meet of Champions on Saturday. White just ran his own race taking the lead on the second lap, hit the 400m mark at about 55 seconds and and increased his pace from there all alone. After the fast heat was finished White's time still stood as number one! Joe White already holds the NJ#2 and US#9 spot with a 1:53.76. Who needs a pack to run fast anyway?

Robert Kellert - Managing Editor - Joe White's 800m blindside on the seeded heat was golden but for the sake of not picking two 800m races in a row as my favorites I'm going to go with my other favorite performance by Ian Kirk of Howell. Kirk won the high jump at a height of 6-07, he currently holds the NJ#1 spot with a 6-08 jump from earlier in the season. What makes the 6-07 win special is the fact that it was cleared in a lose and you are done jump off with Kenny Clarke who finished second with a personal best height of 6-06! They had both gone to 6-08 didn't make it and then lowered the bar to 6-07. Kirk showed cool nerves as he cleared for victory.

Pat Montferrat - Photographer / Past Managing Editor - Blaise Ferro ran the perfect race, handling a top notch field like someone much older. the CBA  soph ran a patient race while those around him took their turns at the front. He tucked in, racing near but not in the lead,  grinding it out until just before the bell. Then he said "well, it's time to go" to the rest of the talented field. 9:12.70, a 5 second margin of victory, over that field was a masterful piece of racing.

SJPixShooter - Photographer - We're at a disadvantage because photographers don't really get to appreciate what they see before them! That said, I liked the way Kirk, the High Jumper, stepped-up at 6' 6" and cleared to tie with Clarke to move onto 6' 8".  Then, when neither cleared at 6' 8", the event went to a tie-breaking routine. Once again, they both missed at 6' 8" and the bar was dropped to 6' 7". Clarke missed, Kirk cleared. He acted very calmly throughout as if he was saying confidently to himself . . . "this is what I do." (This opinion may be influenced by my previous experience as a High Jump coach . . . just sayin'.)

Aaron Laserna - Photographer - Blaise Ferro's 3200m win was unexpected, but nonetheless an amazing feat despite only being a sophomore. In a loaded heat with past consecutive MOC winners, Tom O'Neill and Kyle Levermore, Ferro consistently stayed right with the leaders of the pack, with various runners shifting at the top of the pack, trying to push the pace after a surprisingly slow first mile. After a sudden move to separate themselves from the pack, it became a battle between Ferro, O'Neill, and Levermore towards the latter half of the race. Ferro came out on top with a huge finish to upset O'Neill, the defending champion. It is going to be great to see what the future holds for young CBA star Blaise Ferro. Congratulations!