Too Long?  Too Short?  Or Just About Right?  The Goldilocks Principle. 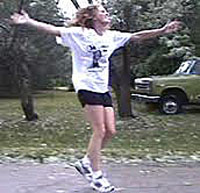 Is the NJ high school cross country season too long?  It’s easy to think that way when viewed in isolation. Counting summer training and post-season national events, the “season” can run from late June to early or mid-December – nearly 6 months all told. I think for most high school runners, the season is just about right. For a select few however, it can turn into a long slog, where runners peak to early and fail to perform at their best when the most important races occur.

My views on this aren’t much different than Mr. Byrne’s –I just don’t think that a statistical analysis of a few meets works well. First, I think the sample size is too small – you can’t look at the top few runners and make generalizations on what the rest of the runners are doing. Those top few runners – an elite group out of thousands are high school runners – aren’t representative of the mass of the high school cross country runners. Second, choosing one or two meets is a poor predictor of what happens over the course of a season – a bad day by only a handful of runners in any of the two meets starts warping data. Third, end of the season championship meets – Groups and Meet of Champions on the NJ stage are often vastly different beasts than the regular run of the mill meets during a season. A meet where large groups of runners are capable of breaking 17:30 at Holmdel have different dynamics than races where the large group struggles to break 18:30 or 19:00. Two totally different races, and it’s difficult to make a one to one comparisons between the two.

So instead of stats, I’ll explain the way the season works – or doesn’t – for the majority of the high school runners. The problems I see occur when teams willingly extend their season too long in the hopes of reaching the next level, or have long seasons with too many meets and incorrectly structured training due to poor coaching. Outside of the latter, which is another topic altogether, the issue of burnout occurs when athletes from one level of competition try to move to the next level of competition. However, that’s the job of a coach – and one that is extremely difficult to manage when your team consists of 14-18 year olds who are developing physically, emotionally, and psychologically.

To understand why this is so, we have to look at the different types of high school runners and teams. In the simplest terms, there are three groups, representing the different levels of achievement. This division applies to teams as well as individual runners, and is based on the expected level of competition. All three groups have different goals for the season, and different season lengths – based on what they think they can accomplish.

The first group, the local runners, is the largest group. These are the runners and teams that won’t win or place high at their county or conference meets. For the vast majority of high school runners, this is what the sport is about. Dual meets against other local teams, invitationals on the weekends, and a handful of “championship” meets – the county, conference, and state sectional meet – all finishing up by the first week in November. For these athletes the season stretches from July (or even August in some cases) until early November.  Using estimates of mid-July to November 5th (the date of the 2011 NJSIAA Sectional Meet), that’s a season of 18 weeks, 9 of which are training, 9 of which are racing.

The third group is the smallest group – the national runners. For these kids, they look to be racing well through the end of November, and hopefully into the second week of December. It is a very select group of runners and teams – usually no more than a dozen individuals and a half dozen teams per gender have any shot at post-season meets, and the number that will move on is usually smaller. NJ is lucky if one team and 3 individuals per year move on to race in San Diego and Portland. These kids are looking past dual meets, and for the most part are foregoing early season invitationals. They may not begin their racing season until late September. However, they have been likely training since the end of track season – late June. Their season can be as long as 25 weeks – however, the first 13-14 weeks of that are likely spent in pure training, again with only 9-10 weeks of actual racing.

The second group is the middle group – the state level teams and runners. These are the ones who will likely qualify for the group meet and hope to make it all the way to the Meet of Champs. These are the ones that are the highest risk of over racing and burning out as the season wears on. These teams most often rely on a combination of upperclass veteran runners and a handful of freshman and sophomores who may be the final piece. Like the national runners, they may begin training in early July, with the hopes of a long summer of training to get them to the next level. But in contrast to those national runners, they usually begin racing early, hoping to build experience in large races that will benefit them at the group meet. Their season may last 22 weeks, with 11 or 12 weeks of racing.

As I listed above – most teams are competing only in the 9-12 week range; with another 9-12 weeks of training. For high school athletes, I think this is just about right. Developing distance runners need a large base – and a base that is roughly half the length of the season is a good start. If it is anything shorter, runners will surely run out of gas, wasting any efforts in the early season (In fact, my main problem with indoor track is that it takes away from the base building phase of outdoor track). However, when teams try to move from one group to the other – the local team that qualifies for the groups, the group team that makes it to MOC, the MOC team that tries for a post-season berth – those plans start to break down, the season becomes too long – the base becomes smaller relative to the racing season. Runners who never competed late into the season will find it tiring, especially more so if they had been competing since early September. And that’s tough to predict – at the level of high school kids – relying on a 15 year old to run consistently throughout the season (no matter the length) is a tall order.

High school kids are going to be unpredictable, and are going to break down when the season gets too long. And they won’t run well when it is too short either. But knowing when the season is too long and finding the breaking point is part of the discovery of what kind a runner an inexperienced athlete is. Even good coaches have a hard time picking the exact limits for a young runner. Great coaches do it with some consistency, and even the best coaches get it wrong quite a bit. In the end, it’s not the seasons fault – it’s the way the training is structured.  It’s the Goldilocks principle: can’t be too short, can’t be too long, and has to be just right.  Finding that “just right” is the goal for all athletes and teams, no matter what their level. 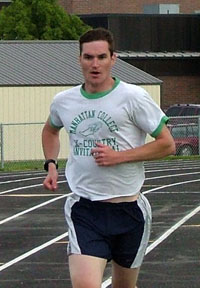 George Kochman III grew up in a track family, tagging along to meets since before he could remember. He ran for and graduated from Christian Brothers Academy and Georgetown University. He is still a Track junkie at heart and a proud Jerser. He is currently an Emergency Medicine doctor in Pittsburgh, PA and on that special weekend in April can be reached on the backstrech during Penn Relays.