Deptford, sparked by Lathan Brown's sensational quad, won its second straight boys title, and Rumson racked up 46 points on the track  on the way to capturing the girls championship at the NJSIAA Group 2 Relays on Monday at the Bennett Center in Toms River.

Brown was simply spectacular for Deptford as the senior became the first athlete in school history to run on four winning relays, leading the Spartans to a 56-46 victory over Rumson. It's the third state relay title for Deptford, which also won in 2019 and last year.

Junior Darryl Wayman also had a big day for the Spartans, running in the victorious shuttles, 4x200, and 4x400.

In addition to its 40 points on the track, Deptford also picked up key points in the field from its jumpers and throwers as the Spartans finished second in the both the high jump and shot put. Senior Quinn Burnette (47-10) and junior Connor Trantas (40-4.25) each came up with huge PR's for Deptford in the shot put, and senior Bryan Hairston (5-10) and junior Abu Jabbie (5-8) combined for the runner-up finish in the HJ.

Cinnaminson, third in the boys standings with 29 points, had a huge day in the field.

Malicah Etienne, a junior at Cinnaminson, launched the shot put 54-2, the best throw of the meet, No. 6 in the state, and a PR by nearly three feet. His previous best of 51-6 came last spring. In the high jump, Cinnaminson junior Derrick Robinson, the state leader at 6-4, cleared a meet-best 6-2. 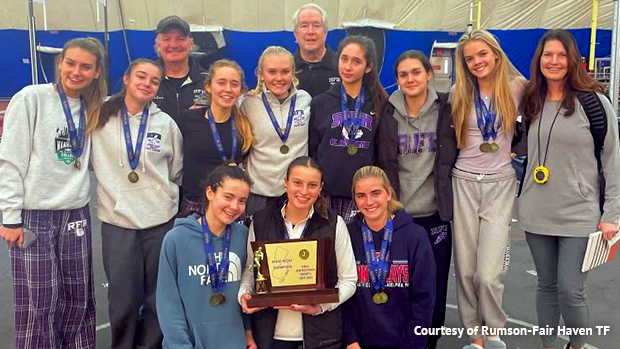 In the girls competition, which featured a showdown between Shore Conference rivals Rumson and Point Pleasant Boro, Rumson won four events on the track and scored in two field events to secure a hard-fought 50-40 victory over Point Boro.

This is the third state relay title for the Bulldogs, who also captured championships in 2018 and 2019.

In the DMR, Julia Shanes, Izzy Rodriguez, Katie Murray, and Sarah Butler shared the baton for Rumson. In the 4x200, Kate Hennen, Reese Reynolds Malone, Clemmie Lilley, and Megan Burns teamed up to win the 4x200. Rumson's SMR consisted of Hennen, Burns, Lilley, and Shanes, and the members of the 4x400 were Hennen, Reese Reynolds Malone, Ryan Malone, and Lilley.

Rumson's field event points came from sophomore Clara Lilley (4-10) and freshman Anna Olson NJ (4-4), who combined to give Rumson a share of fourth-place in the high jump, and the Bulldogs also earned a point with a sixth-place tie in the pole vault as Anna Applegate (7-0) and Elise Arko (6-6).